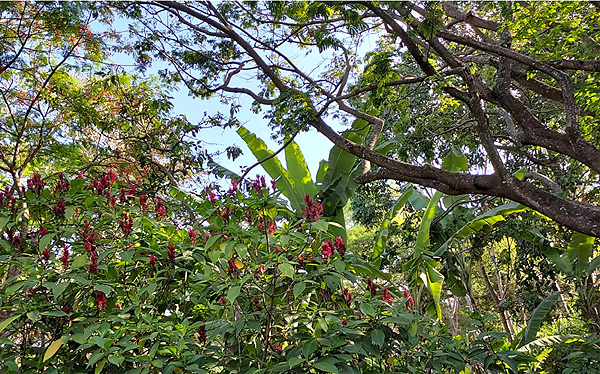 Flame trees in bloom, bananas fruiting, tree hyrax and bushbabies sang us to sleep and the dinosaur silvery-cheeked hornbill buzzed our breakfast as colobus frolicked in the trees. First moment in day time Africa. Breakfast on the terrace with my traveling companion, Steve Farrand.

Steve said the moment he stepped out of the cabin he was reminded of the first time, decades ago, that he first stepped into East Africa. So do I. It’s an earthy, moist atmosphere that throws sounds around as if you were diving. The brusk winds that scatter through most African airports whisk all worries away!

The journey to East Africa from the States is different; I knew that would be true. It’s probably true for far-away adventure destinations worldwide. It had been such second nature to me that all the little bumps and deviations were more than just troublesome, they were threatening. It was like some alien culture had taken over the world and imposed weird regulations.

Steve, on the other hand, whizzed through everything! We ought to change roles.

Check-in began with the kind little man asking, “Are you traveling with a Mr. Steve?” I nodded, not quite sure how they knew since we were on separate computer records. Well, apparently, somehow, mysteries untold, Steve had already checked me in!

As if that mattered. Check-in for our first international flight to Amsterdam is tasked with making sure that we have all the correct documentation, so that the airline isn’t forced (at its cost) to take me back home if my entry is rejected.

Trouble was they had an even worse idea than I did about what the “Tanzanian Health Survey” was. They couldn’t understand why I hadn’t yet completed an on-line survey that you aren’t allowed to take earlier than 24 hours before arrival, 26 hours before arrival as I was checking in!

So finally I was checked in, a mere 20 minutes of my life, except…

I said that Dr. Farrand was already in the lounge anxiously texting me.

The clerk looked up at the glass roof, perhaps wondering if there were any planes in the sky, then asked in a very soft voice, “Could you please ask him to come back? He shouldn’t be in there yet,” he ended with a very inauthentic smile.

So Mr. Steve came back out through security as I went through. The lounge had a dozen people in it. I was the only one masked. Steve made it back pretty quickly. I’d blazed the trail for him. Together at last we began to complete the Tanzanian On-Line Not-Before-24-Hours-Arrival-Time survey.

Steve finished first but got stuck on the payment for the rapid antigen test. I managed that pretty quickly. When we had both finished, Steve had all his proper responses from the Tanzanian Health Department and I … didn’t. Fortunately I’d taken appropriate screenshots along the way that proved very helpful.

The plane was freakishly empty. Only 9 of us in a business class cabin that holds 54, and a quick glance into economy rendered a few dozen out of 160.

During the flight I made fast friends with the flight attendants who I think outnumbered us. The one veteran told me it had been like this throughout the whole pandemic and that, in fact, many flights this light were canceled when the sister leg wasn’t substantially better. So I guess on our day a lot more people flew into Chicago from Amsterdam than with us.

So you can imagine how surprised we were when the flight from Amsterdam to Kilimanjaro was overbooked!

Schiphol wasn’t its usually self. Maybe half the people I remember. Quite a few closed-up kiosks but when we got to the KLM lounge the atmosphere was wholly different: like the plane to Tanzania, it was packed.

I always take a shower in the lounge of a connecting flight to Africa. Just refreshes me. So I gingerly found the lounge showers but was blocked by a woman who looked like a Sumo wrestler wearing not gold chains but all sorts of official tags. ‘Got to do it on your phone,’ she commanded in Dutch but pointing to a large informational sign in English.

So dutifully I labored through an application almost as difficult as the Tanzanian On-Line Not-Before-24-Hours-Arrival-Time survey and received an instant email that I was dutifully enroled to be washed and would be advised of my key number in about ten minutes.

I sat down to read the dreary news about the Virginia Governor’s race. Checked my email and there were four. Moments after the first notification, I was sent my key. Moments later I was chastised for not getting there by then, and the last one said I was about to lose my place in line.

Fortunately I was right next to the shower so I went right to stall #18, brought up the lovely QR code and flashed it on the door and … nothing. Again, different sizes, nothing. Rounded up the wrestler who said I wasn’t doing it right. She grabbed my phone, tried several times, then grabbed one of her official badges and opened my door.

The packed KLM flight was mostly Europeans though there was one small American group from Knoxville that were near me. Everyone masked. The attendants rebuked you if you were unmasked.

Then came the pandemonium of arrival into JRO. We privileged in business class were let out first but there was no class in the way we stiff-armed one another to get into first place. Most passengers masked. Few Tanzanian officials masked.

So Steve and I got separated. All told it took me about 35 minutes from nudging the first health inspector to look at my screenshots rather than non-existent QR code, a mere 9 minutes for the rapid antigen test and results, then the normal immigration and customs. I lingered a while worried Steve was drowning in the pack behind me, but decided I better go out and find Tumaini before the sun rose.

There was Steve! What?! Well, he’d unintentionally, truly unintentionally, gone in the line reserved for certain countries whose citizens require no health documentation to enter. Spain is the only western country, because they’re 80% vaccinated.

Steve did then navigate to the medical booths and got swabbed in the nose like the rest of us, but he didn’t bother to wait for his results. He was apparently the first out and having a robust wonderful conversation with Mr. T.

I don’t suggest anyone emulate Mr. Steve, but I think the African ancestors have successfully used Steve to send us the most important requirement of all to get into Africa: love it.