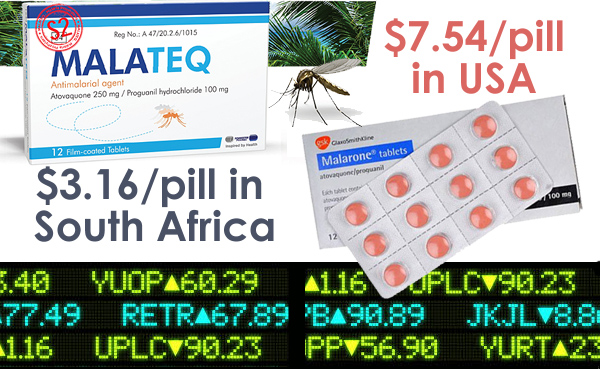 I’m in South Africa where yesterday once again I was put to shame by the common sense and social responsibilities that most of the rest of the world has in proud supply compared to my native land. This time apropos to my vocation, drugs for safari.

Drug companies in the rest of the world are doing just fine. This is not a story of capitalism or not capitalism. It’s a story of unconstrained greed and even worse, support of that greed by those harmed by it. That’s the real sickness.

Many adventure trips go to places where malaria still exists. In fact in the last few years, after a number of years of decline, the disease is once again on the rise.

Over my life time in Africa there have been about a half dozen medications designed to prevent and even cure malaria. In most of those drugs the cure is simply a massive dose of the preventative.

But the drugs are complex. The one most used today is actually a combination of two drugs, proguanil hydrochloride and atovaquone, marketed as Malarone, and it has been used pretty effectively for nearly the last 20 years.

That makes it unique, since the drugs that preceded it all had much shorter effective periods. Even with the current drug combo the worry as with its predecessors is that the malaria parasite will evolve immunity to it.

But so far, so good. But not a lot of people use the drug. As with its predecessors there are side effects that grow more likely the longer the drug is taken. So using Malarone to prevent malaria isn’t a reasonable public health regimen for the millions of people who live in malarial areas. We safari guides don’t take anti-malarials for the same reason.

But it makes great sense for the visitor. In fact without it there might be no safari market!

There’s an even greater market than the safari market. Thousands of miles of beautiful African coastlines and numerous exotic islands draw more visitors annually than to the big game parks. But most of these coastal areas have malaria, so even the sun ‘n sand holidaymaker has to use the pills.

Still, add them all up, and it’s not a big market by big pharma standards. The result was that GlaxoSmithKline, the pharma that held the patent for malarone, charged an arm-and-a-leg for the pill, nearly $15/daily pill.

According to drugs.com, today the average price across America today is $7.54/tablet. Glaxo has reduced its price, because its patent has run out.

And here’s a very interesting addendum. There are more “non-travelers” using the pill than travelers. Foreign aid workers, medical workers, and the hundreds of thousands of foreigners working in malarial lands take the pill. They don’t pay for it directly, of course, but GlaxoSmithKline still gets the money.

How much did GlaxoSmithKline make out of all of this? Hundreds of millions, at the least.

So as the patent expired real fiscal relief was expected by both the safari market and aid workers worldwide as generics were produced. And so it has happened… except in America.

There are a half dozen generics now available worldwide for Malarone. Yesterday I bought 12 pills as a walk-in customer in a Cape Town pharmacy for 554 Rand, about $3.16/pill, less than half what Malarone costs at home. That was a minimum purchase. If I was interested in more pills, the price goes down further.

Generics are available in the U.S. but hard to get. Right now you have to buy at least 100 pills, travel clinics will not prescribe them and U.S. agencies will not authorize them for overseas workers, including for Peace Corps or Food for Peace. As far as I can tell the only way to get the inexpensive generic in America is online in large quantities.

But you still need a prescription in America, and doctors are reluctant and I haven’t found a single Travel Clinic that will do so. They all need GlaxoSmithKline for other things, you understand.

You get the drift.

Why should it be so easy for me to walk in to a pharmacy in South Africa or London or Mumbai or Sydney and pay a reasonable rate for a pill? But I can’t do that in Chicago?

You know the answer. It’s all about keeping America healthy, right?