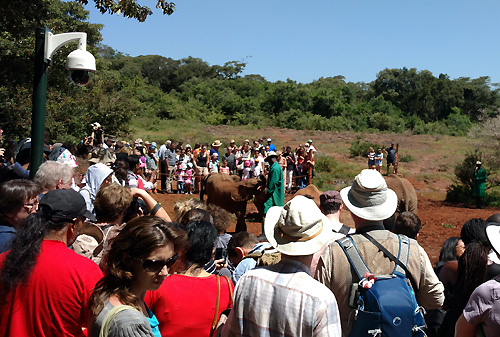 We were among about 400 people at the Sheldrick elephant orphanage yesterday, and I carefully scanned the group noting only five non-white visitors.

The day before we visited the Giraffe Centre and I’d roughly estimate that 50% of the visitors there were non-white.

I presume that most of the non-white were Kenyans or Africans. It demonstrates in clear contrast how the local population views elephant conservation versus some other animal conservation, and the reason is the escalating conflict between elephants and people in developing Africa.

The Sheldrick orphanage and the Giraffe Centre are both top Nairobi attractions. It was Sunday, the only day of the week that there is fast-moving traffic on the city’s many highways and thoroughfares, and it was beautiful dry weather.

I believe that under this quiet de facto protest is a growing and serious animus Kenyans feel against conservation driven by outsiders. Kenyans probably are more conservation oriented than many would presume. Several local organizations have saved Nairobi’s forests and its national park. The legendary Wangari Maathai is among the few conservationists to receive a Nobel Prize.

So the animus towards elephant conservation does not imply a general anti-conservation attitude by any means. But elephants have drawn by far and away the most international attention, and it has been exclusively concern expressed for the elephants … rather than for the “ecosystem” or the “national parks” or anything that might include the people, too.

It’s a terrible failing of western animal conservation organizations to have directed their appeals so exclusively outside the areas for which the appeals have been made. True, the possibility of getting donations from mostly emerging and poor countries is very limited, but it would have conveyed a sense of inclusion. Instead, policies have contributed to exclusion for years.

The most common presumption about the value of big game here in Kenya is that it is a commodity that attracts rich foreigners. Particularly as now when the European and Asian economies are declining, and therefore the bulk of tourists decline, there are fewer positive returns from the endeavor.

What is always behind the scenes moves onto center stage: elephants are big, destructive and enormously expensive to conserve. Only the decadent wealthy foreigner insensitive to the desperate need for all sorts of human conservation has a desire to protect them.

The more fulsome arguments regarding ecosystems and biodiversity have no chance, because no serious groundwork has been laid for these more complicated justifications.

So many of Africa’s problems can be laid squarely on the failure of the developed world to treat Africa as an equal part of the human community, and the current acceleration of elephant poaching is no different.

Until western conservationists recognize the sovereignty of Africa in all things African, including its elephants, there will be no change.