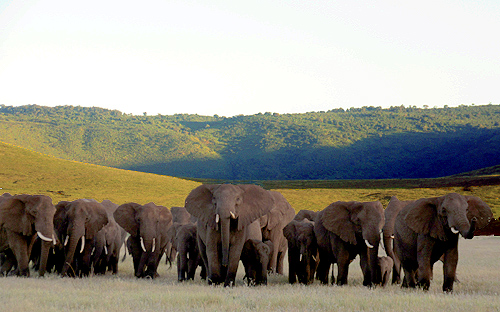 We stopped to watch, and their trumpeting exploded all around us. The matriarchs of each of the four families turned to us, opened their ears and two charged!

Youngsters, one hardly a week old, didn’t know where to turn as the mothers confronted us. We held our ground; they were mock charges, and I knew that we couldn’t run from them if it were anything else.

We stayed quiet as they ran far past us, their trumpeting continuing and diminishing, the beautiful song of the red-naped lark finally penetrating their screeching.

The stillness of the early morning crater was forever unsettled. What had happened to them? I don’t know. It was only just after sunrise. No one else was on the floor but us. What had set them off?

It would be easy to say someone had tried to poach them, but that’s unlikely. Poachers don’t dare try to take down an elephant in such a large and wild group. We’ll never know. Perhaps they were from some distant place and had never seen the vast plains of the crater, moving their lives from one forest to another.

I just don’t know. But it was super powerful and heart-thumping. I just hope in the forests beyond the crater rim they’ll find some peace…

The rest of the morning in the crater was beautiful, perfect and normal. That’s quite abnormal!

About 25,000 animals were scattered marvelously among the mostly green plains and lush and verdant crater rim sides. There was a baby wildebeest for every two adults, 25 fat and sassy lions some licking deep hunting wounds, a giant rhino, hundreds of buffalo, black-backed and golden jackals, eland and hartebeest, hippo and elegant birds like the Hildebrandt’s starling and purple grenadier.

There are too many elephant in East Africa, and there are too many tourists in Ngorongoro Crater but it just can’t be missed. The crater is magical and often unbelievable, dense mixtures of animals and predators that would never be seen so close together elsewhere on the veld.

Nowhere else are the chances of seeing black rhino as we did so great. Nowhere do multiple lion families live so close together. Nowhere are zebra so approachable that you really could stick your hand out of the car and touch them.

Is this wild Africa? No, but it’s been this way for nearly a hundred years, ever since hunters have been restricted from the crater floor.

Many potential travelers on safari complain that they hear there are just too many tourists, that it’s too crowded. As tomorrow on this safari will show, there are many days – if not most days on safari that my convoy of vehicles is the only one on hundreds of square miles of veld.

But it’s true of the crater, because there is nothing else like it on earth, and it simply cannot be missed. 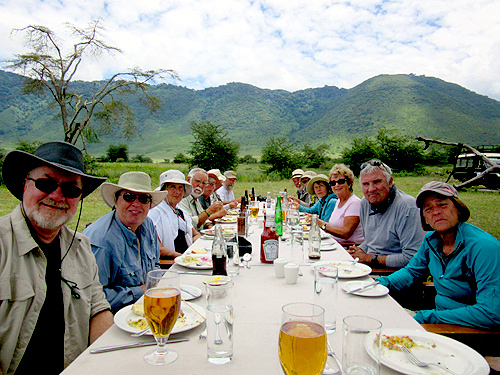