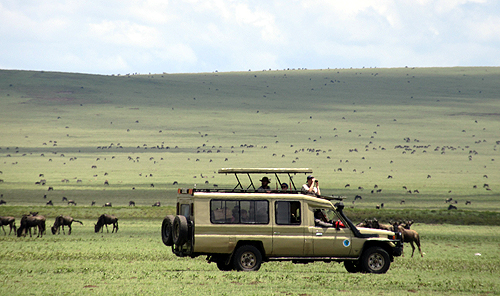 For more than a half day we were immersed in the Great Migration. For at least four of those hours we were driving, constantly surrounded by wilde, zebra and breath-taking scenery. We saw perhaps three-quarters million animals … or more. How do you count endless dots from horizon to horizon?

And for that entire time, from start to finish, from 11 a.m. in the morning to 5 p.m. in the evening, we saw no other cars, no people but Maasai herdsmen. We were 11 people and two safari vehicles alone in the greatest wilderness on earth!

We entered the great southern grasslands just after Shifting Sands not far from Olduvai Gorge. The veld was green and beautiful, so unlike when I was here 12 days ago.

We immediately saw some wilde and zebra, but it was through our binocs that we saw the enormity of the experience which awaited us.


Hardly a half hour later, driving off-road across the plains we encountered the herds. For the rest of the day, from about 11:30a to 5 p.m., wilde were everywhere.

We saw massive herds from just north of Shifting Sands up to Lemuta, northwest all the way to Naabi and into the Gol (perhaps it went on from there, but we could see no further) and west virtually to the main road.

With our binocs we could see great herds further north, but we had to head west to Ndutu. From what we saw I’d estimate the migration filled at least 125 sq. miles, but that was all we could see.

It was so much different than the quarter million we found far from this place in the Masabi Plains 12 days ago.

They were frolicking and bouncing, like healthy wilde, twisting in the air as they ran. There was incredible blarting. This was the normal migration I know, not the distressed one coming out of the 6-week drought we saw hardly two weeks ago.

But it was unique, too. The beautiful grass was new. There was little scat, few zebras, no eland, only 2 hyaena and a handful of ostrich. Of course the veld was filled with tommies, but they reside here year-round.

There were tens of thousands, perhaps hundreds of thousands of red-capped lark. This remarkable little bird has a distinct job in the migration yet to be fully understood, but it is always found in the vanguard of quickly moving herds.

It was green throughout, with many, many pools of water.

Where did they come from? Where had they been?

I remain convinced that the drought fractured the herds. We can say now that it fractured into at least two large pieces and many smaller pieces, but perhaps even more large pieces.

One went into the western corridor, 2-3 months ahead of schedule. Those composed the quarter-million we found 12 days ago. The much larger piece we saw from Lemuta west must have been in the valleys of Angata and towards Sale, perhaps west of Loliondo but east of the Maasai kopjes, although it had been reported very dry there, too.

Perhaps this larger piece wasn’t a large piece, but dozens if not hundreds of smaller fractured pieces.

What particularly amazes me is that when we saw the Masabi herds leave the western corridor right past Soroi Lodge on the old road through the pass to Seronera, I couldn’t understand why they were leaving. It was still raining and the grass was beautiful.

But leave, they did. So why? Why make the trek down to the southern grassland plains if you’re surrounded by excellent fodder?

Is it hard-wired into them to linger in the south until the rains recede in a normal fashion? Are the grasses in the south that much more nutritious and does wilde physiology recognize this?

Whatever the answer, the migration is back on track this year after being dramatically wrenched awry by the drought. I just hope the rains continue as normally they would.

It will take at least another month for those who survived to recover their normal body weight. There are far fewer young than normal. The year will end badly for wilde numbers.

Climate change is devastating the earth. The Great Migration avoided a catastrophe this year, but it seems now like every year is somehow abnormal. Small periods of intense drought are spaced by horrible flooding.

It worries me how long this most amazing spectacle on earth will continue.