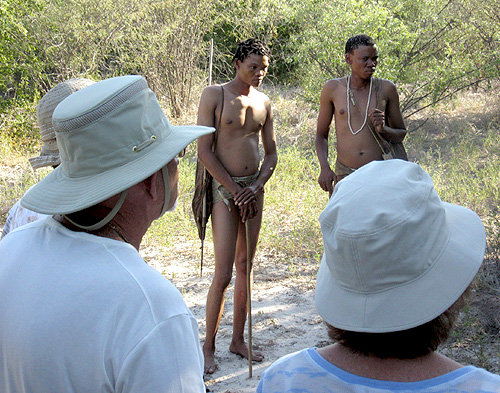 The Naru Bushman experience was the highlight of our two days in the Kalahari.

I’m continually upset when clients ask me to “visit a village.” There are no traditional villages left in most of Africa, and certainly not in the areas that tourists can visit.

Yet someone will insist that their friends just came back and that they “visited a real village.”

What their friends saw and what they ask me to see are horrible remnants of traditional life. As Africa progresses rapidly, traditional life styles are understandably being lost as Africans seek better education and a better life.

In many countries in sub-Saharan Africa, however, the development cannot meet the demand, and so many traditional peoples get caught between the old ways and the new ways.


The so-called “villages” that people claim to have experienced are impoverished groups of people who wish they were better off and in most cases are stuck in the worst of two worlds.

It is the identical situation to many impoverished communities in America — distressed villages in Appalachia or southwest Wisconsin. I’m infuriated that travelers will actually return from these visits, claiming to have experienced “the real Africa.”

No longer nomadic, many of these so-called villages become unclean and their children get sick. That was not the case when nomadic peoples moved regularly. Unable to get the jobs that their schooling prepared them for, they down poorly maintained traditional garb for tourists and “interpret” the old ways in the near perfect English they would prefer was being used in a business in town.


In the end traditional life is not conveyed at all. What is conveyed is the disgusting failures of modern development. The glorious and successes of traditional Africa life ways are completely obscured.

Braame Badenhorst, owner/manager of Deception Valley Lodge, has mastered a display of early Bushmen life without denigrating the people who portray it.

Our two Naru Bushmen trackers, both 31-year olds and fine staff additions to our successful game drives, traveled with us into the bush, then hopped off the vehicle as our other guide, Jacob, explained they were going to change costumes.

Bramme wants people to understand what real traditional Bushmen life was like, especially the younger generation of Naru. But he makes no bones about it: “There aren’t any traditional Bushmen, anymore,” he flatly tells his guests.

What his two staff members are going to do, to both our and their benefit, is reenact what it was like 30 years ago.


So they stripped off their khakis, pulled out their earplugs from their iPhones, and gave us the best example of “traditional peoples” I’ve ever had the privilege to see.

It was fabulous. The kids, who I’m ashamed to say I can’t transliterate their names, had mastered their grandparents’ techniques in water and food gathering, hunting, and tool building. They conveyed to us a life style that may no longer exist, but demonstrated how creative and clever their ancestors’ – our species – can be.

In so doing, they preserved for themselves, us and generations to come, mechanisms and solutions for survival that may be valuable even in the modern age, and will preserve in ways no written account can, the history of these magnificent people.

This was a true visit into the past: an unpretentious reenactment of something that no longer exists and risks being lost forever.

Whether it is innate racism or a weak intellect, travelers are plagued by a desire to see “bad.”

Put a Naru Bushman’s day opposite one of John Boehner’s, and there’s no contest. That’s the truthful message waiting for travelers with a real desire to understand what traditional Africa is all about.