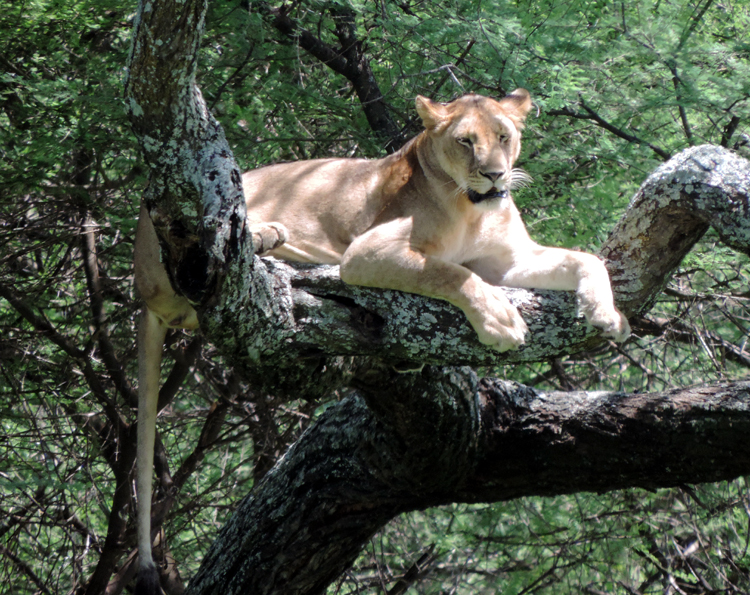 Yes! We saw the lion in the tree that Manyara is so famous for! My client, Chris Kordash, took the excellent shot above. And we saw the hippo pool that until this week had been erased by last year’s devastating floods and mudslide!

Manyara is one of my favorite parks in all of Africa, but it’s hard to arrange well and often hard to sell. I think today managed both those problems well.

The park is very small, hardly 40 sq. miles of ridiculously diverse jungle habitat that falls off the high escarpment of the great rift valley and then rolls over small savannah grasslands into the salt lake itself.

What leaps out at you immediately when entering (other than the baboons) are the trees. The park is dominated by varieties of giant and some ancient mahogany as well as a dozen varieties of giant fig. But there are numerous others, like the ironwood or “rhino ribs” and spiraling rocket ship trees that tower into the sky.

Varieties of trees and forest habitat means there are hundreds of kinds of birds, and the dinosaur like silvery-cheeked hornbill greets most early visitors as if they had just entered Jurassic park.

Last year this little treasure, an UNESCO biosphere, was nearly destroyed by a flash flood and mudslide. Today it’s recovered and literally today we were among the first visitors to use the new walkway above a new hippo pool, displaced after last year’s flood.

So the hippos are back! And the numerous birds at the lake’s edge, including the precious spoonbill, dozens of kinds of plovers and storks including the magnificently colorful spoon-billed and dozens of grey crowned cranes.

Frankly I don’t think you need animals for a dramatic experience in Manyara, but that’s been part of the problem. Now that the walkway and new tracks have been cut, we again saw lots of giraffe, buffalo and zebra. And …

Manyara has always been famous for lions in the trees. While many travel companies like to keep it a mystery, it’s a simple fact that lions don’t climb very well.

So when you have as diverse a park as Manyara, with its many types of trees, many which have low horizontal branches, the clumsy lion can finally find something it can climb!

So our half-day exploration of Manyara was a complete success! And congratulations to TANAPA and UNESCO for rebuilding this magnificent park!