Skip to content
It was Bingo in Barafu today as we drove into the locus of the great migration, probably seeing a couple hundred thousand animals before the day was over.

This is always the easiest time of the year to find the largest single migratory group of wildebeest. It’s never the most dramatic time (which is the river crossings later on), but I prefer now because you see so many more animals.

And because there are so many babies. In fact, the herd has suddenly grown a quarter larger as nearly every mature female calves.

And set on a veld that is so spectacularly lush and colored by multitudes of wild flowers, it’s hard not to understand why this is my favorite time.

Nevertheless, finding “the migration” (which means a significantly large portion in one group) is not as easy as it seems.

The animals move with the most nutrient grasses, which grow where it rains. So finding the migration is as easy as exactly predicting the weather!

But we had intelligence that placed the migration in the Gol Kopjes, north of Naabi Hill. That in itself was a bit unusual, tad too far north and east for this time of the year. But clearly they were not around Ndutu, where “normally” they would have been, and yesterday our encounters with them after Olduvai to Lemuta suggested our intelligence was correct.

Mind you, there were wildebeest almost everywhere we looked or traveled in the southern quarter of the Serengeti/Ngorongoro. But the smaller scattered herds of maybe 200-400 were not a big enough or uniform enough group to be called “the migration.”

We headed to Naabi Hill, slipping and sliding as to be expected after yesterday’s incredible late afternoon downpour. On the way, we saw a family of three cheetah, a mother with two older cubs.

They were fat and sassy and not likely to hunt now, except that a juvenile Grant’s gazelle separated from its family group was trying to get back to it, and the cheetah were in the way!

I couldn’t believe how daring that young gazelle was, and it provoked one of the cheetah who gave it half chase. And that’s all it took for the gazelle to disappear into the sunset, apparently giving up whatever family ties prompted its initial reaction.

We saw another cheetah with full belly when we finally reached the Gol and then a lioness atop a kopjes, when we hit an empty but green plain filled with flies. That and confirmation of the droppings that lots of wilde had been there recently made us realize we were on the right track.

It was a lot further than I expected, given the intelligence we had, but the herds had obviously moved. Our intelligence was 3 days old and the herd was actually another 10k north and east of where I expected them to be.

But there it was, a “hot dog” shape of wildebeest perhaps 20-25 kilometers long and 3-4 kilometers wide. It lay north to south on the far eastern side of the Serengeti nearly touching Loliondo. 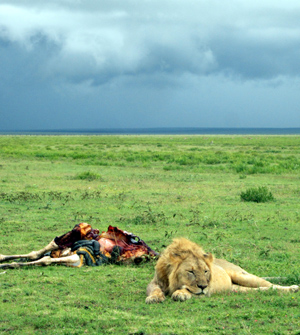 We stopped for lunch on a high kopjes overlooking the veld. It was an incredible accomplishment finding this amazing spectacle, the greatest in the world, and everyone realized the long drive necessary to reach this point was worth it several times over.

The rest of the afternoon we spent cruising through the herds and making our way home. And towards the end of the day, we came upon the same four brother lions we had seen yesterday, and two of them were lying beside partially eaten ostrich!

Seemed to me it had to be hyaena and our four brothers just got irritated with the fact the kill had come so close to them. Their bellies were still full from their kill several days ago. I’m sure they ate some of the bird, but most of it lay “unused.”

It was a fantastic, successful day!