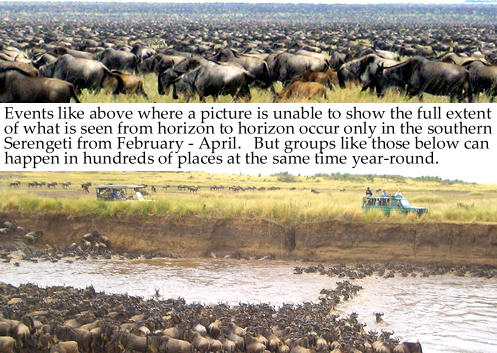 The East African newspaper reported Monday that “A change in the spectacular wildebeest migration schedule in the great Serengeti-Mara ecosystem has caught ecologists offguard.”

Using reports that seem confined to a luxury private lodge in Tanzania just outside the Serengeti near the Kenyan border, the article went on to say that 150 – 200,000 wildebeest were reported around this lodge in September, “never before seen.”

This was then picked up worldwide. Such reliable on-line sources for Africa as ETN headlined the same day, “Mystery as great wildebeest migration cut short in Maasai Mara Game Reserve.”

Stop! Stop! This is all wrong!

Now none of this current balderdash is as infuriating as the scandalous “Wildebeest Migration Blogpost” – which of this writing, by the way, hasn’t had an entry since June. That completely misleading blog actually comes out of a South African tour company whose principals are never in Tanzania. Figure that one. Practically everything in that blog is dead wrong.

The main article which started all the nonsense Tuesday seemed to have been motivated by a single blog from &Beyond’s Klein’s Camp, a great private camp just east of the Serengeti and south of the Kenyan border. Their blogs have reported numerous wildebeest herds as early as September. But they’ve been going and coming, as is normal in a year of heavy rains.

This has been a year of heavy rains.

Deeper into the Mara, that is further north from Tanzania, many camps like Governor’s reported “best migration season ever” this year, which would normally mean Tanzania saw nothing abnormal at all.

The truth is that it has rained so heavily this year, that there is good grass in many places that in normal years there would not be good grass. This means the migration is spread out all over the place.

Tourists – even veterans – tend to report they’ve seen a “great migration” when at best they can see only a tiny fraction of the herds. There are likely 1.5 million wildebeest.

When I sit atop Wild Dog Hill southwest of Ndutu in late March and look around me for 360-degrees over flat plains covered by wildebeest, from a horizon on the west that is probably 60-70 miles from the horizon on the east, we are probably at best seeing a quarter million. This scene only happens in the southern Serengeti from February – April if the rains are normal. Only a teeny-weeny fraction of tourists ever sees this.

The vast majority of tourists see “the migration” as large numbers of wildebeest moving across the plains or jumping over rivers, and these groups probably at most number a few thousands.

Smaller events like these can happen in a thousand different places nearly at the same time! These are usually in the last half of the year, mostly reported from Kenya’s Maasai Mara (because that’s where most of the tourists go). But these types of events can happen almost anywhere year-round depending upon the rains.

It’s just that over centuries the rainfall has been more or less regular. (That, by the way, may be changing with climate change, but not enough yet to alter long-term statistics.) Normally, heavy rains fall on the southern Serengeti during the first half of the year, and heavy rains fall in the Mara (northern Serengeti) during the last half of the year.

This year there was a lot more rain than normal everywhere, and it ended later and began earlier. So wherever they moved they could eat. So they’d eat themselves out of one place, then race over to another. Then it would rain where they just were, so they’d race back. This is not unusual.

The reporter got charged up when he made the mistake of asking Tanzanian scientists what it all meant. In complete deflection of the facts, the Tanzanians basically said it was great … because the “unusual ecological change” meant there were more wildebeest in Tanzania than Kenya, and they just love to stiff their Kenyan counterparts.

For tourists, it was great everywhere! So don’t worry either if you’re a traveler or a lover of animals. Everything’s doing just fine.

At least this year.