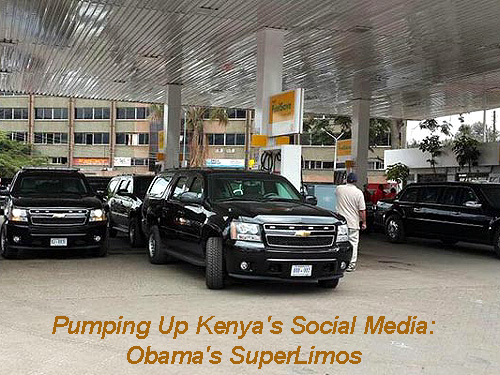 Kenyans have never expressed such glee and excitement as for Obama’s visit Friday, but why is our President coming?

Obama’s pragmatism is driving his third visit to Kenya Friday, (with a quick and very controversial stop on the return Sunday in Ethiopia). His previous two visits to Kenya, as a student then as a Senator, were not nearly as important.

City roads – normally congested beyond belief – will be cleared for his motorcades. Social media is overflowing with pictures of his super limousines filling up with gas.

“We have filled the potholes, cleared the garbage, run the homeless street families out of town, aired the drapes, polished the crockery, beefed up security, and for the umpteenth time attempted to ‘beautify’ the landscape on the main thoroughfares into the capital city,” writes Nairobi commentator Gaitho.

The Right claims the visit is proof of Obama’s cavalier foreign policy: They wrongly consider Kenya more dangerous than Ferguson, Texas or Baltimore. And even if it were, better to thumb your nose at terrorists than cower inside Beltway fantasies.

Unshackled by the presidency Obama was outspoken when he came before, which he is not expected to be this time. It’s unlikely he will stake any controversial policy issues.

Many groups in Kenya are hoping otherwise, however, with large demonstrations planned for support of gay rights and separately, for the end to Kenya’s involvement in Somalia.

Both issues are American driven: it’s fair to say that the recent movement throughout all of East Africa to suppress gay rights is the culmination of a number of American programs and policies promulgated under the Bush administration.

It’s widely known here that Obama flip-flopped at least on the extent of his support of LGBT rights. The Kenyan gay community hopes that he will express that tolerance as rectification of a super power, not just as an individual.

Kenya would never have invaded Somalia in October, 2011, without enormous American hardware, support and training. The country has paid dearly for that, with numerous terrorist revenge attacks in 2012 and 2013.

“Women Empowerment Kenya” is leading that charge, but has wide support throughout the country.

That’s the point, friends. Obama’s presidency has been so contained by a rightist Republican onslaught on his person and policies that everything he’s done in Africa has been behind the scenes. It’s not his choice to be limited to “symbolic” actions.

It drives me crazy the way respectable media call this visit “symbolic“ implying that he’s capable of more than. Much of the world – even in London – doesn’t understand how hand strapped a president can be by Congress.

The Somali war was never a legislated program in either the U.S. or Kenya, yet it is arguably the single most profound event to have befallen Kenya in modern times.

It was Obama strategy. I’ve often written that I felt it was a bad strategy and an even worse move done as secretly as it was. But the man believes in it, and he comes to Kenya owning up to it and undoubtedly to continue to support it.

The reversal of C-Street machinations in East Africa that so suppressed the gay community was also “behind the scenes.” Obama might reverse that with this visit.

Like all Third World countries, Kenya experienced a horrible crush albeit delayed a few years from the Great Recession. But that also came at a time of civil upheaval after the troubled and violent 2006/07 election, and then the Somali revenge for the invasion near crushed the spirit of the country with nearly continuous terrorist attacks.

All that seems behind Kenya, now. Somehow, this country has emerged if not renewed at least recharged. If Obama’s footsteps onto the country do nothing more than affirm this amazing resilience, it’s worth it … for both countries.

As for Ethiopia, one of the cruelest and most ruthless autocracies on the continent and with which the U.S. really has little in common, need I say more than that China has financed the world’s biggest dam here, one that could seriously stress the flow of The Nile?

At least Obama brings the U.S. to the table. To suggest the U.S. can ignore an issue of this magnitude is lunacy. Surely it’s worth the few hours stop scheduled.

So stop the complaining. I wish we could do more, but until we have more reasonable legislators in Congress, Obama’s doing the best we can.