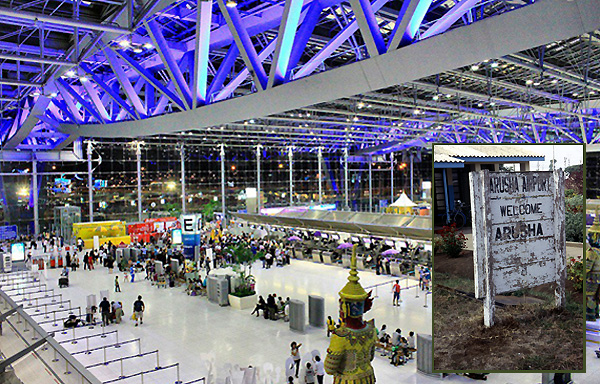 How times have changed! I love cliches. And the pandemic has helped refresh traditions and with that, nostalgia, and with, sentimentality and so now I’m terrified. In a few weeks I head back to my most loved Serengeti. What will it be like?

I drove my first safari vehicle into the Serengeti from Kenya’s Mara in February, 1972, and when I’m reminded that’s a half century ago I feel like putting on a toga and sitting on a park bench dribbling bread crumbs to pigeons.

I’ve not before this abandoned the Serengeti for more than a few months at a time. Now, it will have been 19 months! That’s a life time for the safari ant. I’ve missed a whole generation of marauding battalions of safari ants flowing over the veld like Roombas!

Friends who know I’m on my way are making me feel better by sending old photos.

Like the one inset above: the original airport in Arusha, Tanzania. Steve Taylor, former director of the Cleveland Zoo, says he took this in 1985. It’s inset the reality of today, Nairobi’s super-modern, efficient gigantic Jomo Kenyatta International Airport.

What I’m expecting – and you can call me out by following my blogs – is that things in the places I love like the Serengeti won’t have changed as much, proportionately, as the Arusha airport to the Nairobi hub.

I’m expecting the animals to have lost a bit of their tameness and be a bit more leery of us observers. I’m still wrestling with whether that’s a good thing or a bad thing in the context of modern tourism as a pillar of conservation.

I’m expecting my cars to break down a lot more than they used to. They haven’t been used in 19 months, what do you expect?!

But most of all, I’m expecting to be awestruck as I always was each and every time I took but an instant to gaze over the vast Lemuta Plains, wondering in real time if it’s really real.