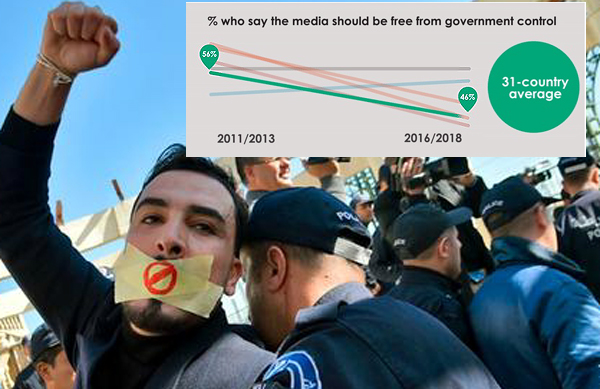 The State of the World, or … the fight between Nadler and Trump, is beautifully encapsulated by the volumes of reports being issued to mark this World Press Day:

We’re losing control of truth. Worse, we’re ceding our individual determinations of truth to media and the political leaders they support. This trend is most dramatic in Africa where in a mere five years the majority who vigorously supported press freedom no longer do.

According to AfroBarometer in a report released on the eve of World Press Day 56% of Africans five years ago supported press freedom, but today it’s only 46%.

This is globally reflected by one of the world’s most respected human rights’ NGOs, Article 19. The UK based not-for-profit’s annual assessment of press freedom and freedom of speech claims, “The global state of freedom of expression and information is at its lowest point for ten years.”

What’s interesting – and frightening – though, is that individuals don’t want to give up their right to freedom of speech. Rather, they’re sick of the media.

And unfortunately while conceding their sickness comes from specifically and often easily identified sources like Fox News, it hardens their overall assessment of media in general.

To avoid becoming overwhelmed by the nano-splitting rate of news, people are beginning to embrace one section of the biased media or the other, as the only way of seeking the truth… even if their choice happens to be wrong.

In Africa, today, governments are explicitly endorsing certain media. This credentials that media as either truthful or false, right or wrong, depending upon that government’s public support. So in places of troubled leadership right now like Madagascar and the Sudan public support is tanking for media approved by the existing regimes.

Whereas in places like Tanzania the public support is tanking for media that is critical of the existing regime.

It’s a stark and terrifying contrast, because “in truth” these governments don’t always read very well. There is absolutely media in Tanzania critical of the current administration which is nevertheless basically truthful. Similarly, there is media in Madagascar which is flat out wrong that the public reveres simply because that newspaper opposes the current regime.

This dynamic is playing out worldwide and according to Article 19 develops a dangerous symbiotic relationship between media and “the truth.” As world politics heats up that relationship grows more and more powerful: either the truth is reported as factual and non-relative even when it may be, or all truth is totally suppressed.

This increases the division between all components of free expression and more and more the widespread discounting of reality.

This is, in a word, Nineteen-eighty-four.