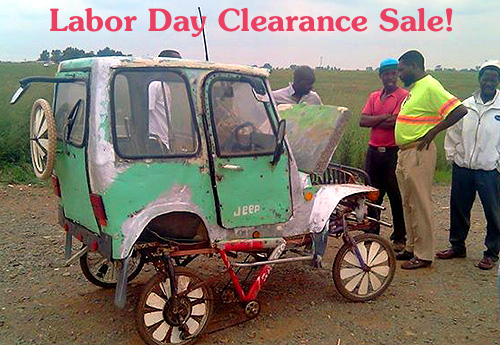 In places like Africa inventors’ goals are often limited by poverty, but the outcomes may actually be more beneficial!

Perhaps the most complicated involvement that a client of mine preparing for safari must undertake is organizing their air arrangements, their travel.

The complexity grows every day. The plethora of mileage awards and the credit cards which are their principal fuel is confounding. The goal to obtain a “free ticket” has exceeded the ludicrous and become simply debilitating.

So why not build your own aircraft?

Onesmus Mwangi lives not far from Nairobi and works as a farm worker who earned $25/month until his boss learned of his fame recently and increased his monthly pay to $30.

Because his lodging and food is added to his compensation he was able to use almost all his earnings to fly away … or at least try to. So he built a helicopter for $570.

“I attempted to fly the chopper last week but it refused,” Mwangi said. 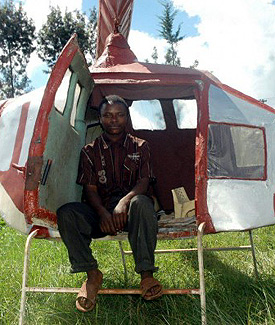 But lots of people are traveling to Mwangi to see the thing. Travel has been produced to be sure.

“Lots of people,” Mwangi says come to see his dream, revving up their own.

The inventor is a primary school dropout. But the point, he says, is that he doesn’t want to learn reading, writing and arithmetic, which he’s mastered. He wants to learn calculus and metallurgy:

“If the government can educate me in engineering, I can come up with more innovations like a fast moving ship and more cohesive chopper than this one. Professionals should see whether they can improve on it.”

Among recent visitors was the governor of Mwangi’s state. Assistance has been promised!

Meet John Pohosoko who lives in Pilanesberg, South Africa. Bikes are used extensively throughout South Africa for obvious reasons, the most important one is that you don’t have to pump gas into them.

But so many bikes on so many streets with so many cars earns South Africa the questionable distinction of an extremely high bicycle accident rate.

John has the solution, a bike that is wrapped with discarded signs.

Designed to warn people of his coming, it’s becoming more and more difficult for John to go anywhere at all because of the weight of his bike. So he’s safe, now!

And then there’s this anonymous creation undoubtedly unclaimed because it gets such terrific mileage!

Yes, in a perfect world Mwangi would learn how to build a rocket ship, and John would have highways with safe bike lanes and anon would actually have a driver.

But in the world of Africa where you make-do, splendid outcomes still occur! 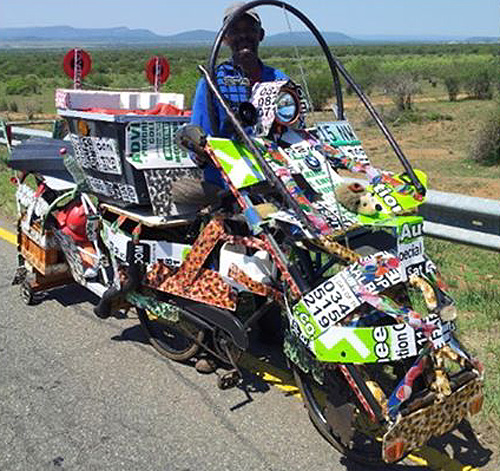 (Thanks to the site, AfriGadget for first publishing these stunning creations!)