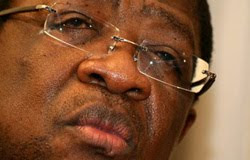 Kenya’s Attorney General is the first name publicly revealed from the secret U.S. list of the most responsible for Kenya’s violence and instability.

As I reported here last month, Secretary of State Hillary Clinton jetted into Kenya with two other high powered diplomats to warn Kenya that they were dragging their feet on promised reforms, including a new constitution that would facilitate the next election in 2012 and before that, bring to justice those responsible for the deaths and displacements of the 2007 election.

With the imminent arrival of the United Nations Under-Secretary, José Antonio Ocampo, naming the culprits has moved from a parlor game to high politics. Ocampo is widely expected to tell Kenyans that the UN is unilaterally assuming the prosecution of those responsible for the 2007 violence, very much as it did for the Rwandan genocide.

Clinton delivered a series of letters designating 15 unnamed persons in Kenya whose visas would be revoked to the United States, because of their obstruction of reform or presumed culpability in the 2007 catastrophe.

I suggested that Amos Wako was one of them, Kenya’s Attorney General for the last 18 years. Today Wako held a news conference to confirm that he had been so named and that he intended to sue Clinton in American courts.

Wako is obviously running scared, as he should be.

Travel to the United States is not simply for diplomatic purposes. Most of these big shots hold significant property in the United States, send their children and grand children to U.S. universities, and park most of their illicitly gained money with American banks.

Denying a mobster entry into the Deli and forbidding him his pastrami sandwich is about as close as you can get to putting him in jail. None of these idiots wants to remain in Kenya once their antics are disclosed. None of them probably wants to come to the U.S., either, but it will take a couple trips to the U.S. to get their affairs in order.

Hopefully, this is going to shake things up a bit in Kenya.