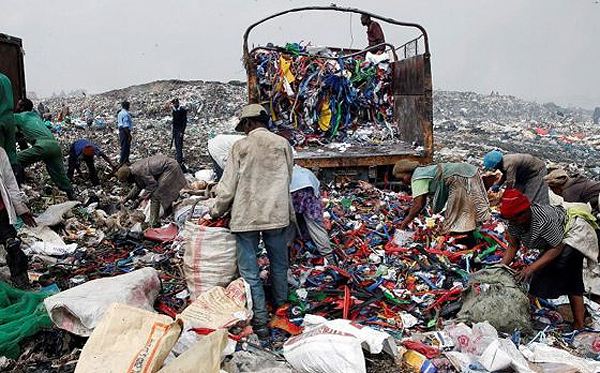 Yesterday Kenya joined 40 other countries doing something the whole world — except Michigan — will likely soon be doing: ban plastic bags.

Significantly, Kenya’s law is the most wide-ranging and punitive of them all. Violators can be fined up to $38,000 and jailed for four years. Visitors to emerging nations are not surprised at the move, but they are often surprised when they understand the reasons.

Visitors to anywhere tend to form their first judgments about a new place based on “how it looks” which usually focuses on surface tidiness. Plastic bags line Kenyan highways, city gutters and markets. The UN estimates that grocery stores alone in Kenya pass out 100 million plastic bags every year.

But I see plastic bags and bottles along the shoulders of the interstates going in and out of Chicago, and around the poorer areas of many towns in America.

The fact is that in stressed political times neither Kenya or America is going to ban plastic because of how it looks.

In lofty self-praise yesterday morning Kenya’s major newspaper’s lead editorial intoned, “Never again should we let the environment be choked by our failure to act.” Dig deeper, though, and this doesn’t mean ocean shores, meadows or public parks.

The driving force that passed the law was more practical: The region is experiencing phenomenal growth. Ports and sewers have been clogged by bags causing horrific problems. Dams have been clogged with them, seriously disrupting water management including inland irrigation.

Kenya’s uniquely strong law reflects its level of growth relative to its neighbors. It carries a fine up to $38,000 and four years in jail. Moreover, officials concede that it’s likely to hurt thousands who either depend on cheap bags for such things as grocery shopping or actually trade in them, not to mention the 60,000 workers currently employed in manufacturing them in Kenya.

The government has taken the unusual step of cautioning the police from enforcing its own law against individuals who currently depend upon plastic bags, directing authorities instead to focus on plastic bag manufacturers. That’s tough, because Kenya has the last manufacturers left in the region. Its neighbors’ banning of plastic was a boon to this industry. Today more than 60,000 workers are employed in these factories.

Meanwhile businesses that traditionally depended upon plastic bags, like grocery chains, have already been giving out free out alternative linen bags as they had anticipated the law would pass.

Twice before the Kenyan legislature failed to pass the law, because of the strength of the country’s manufacturers and the likely tens of thousands of individuals who collect and resell disused bags. But the problems simply grew to the point where even more citizens were being negatively impacted by “plastic clogging” than those who will now suffer because of the ban.

The same was true in all the neighboring East African countries.

Tourists are not exempted. Bag checks are likely, now, for all incoming visitors. All plastic bags will have to be surrendered to customs officials before visitors can enter the country. This exceeds the law as it exists in most of the other African countries which were sensitive to anything that could negatively effect the tourist trade.

Kenya suffered drastic tourist declines following its turbulent violence of 2007 and the recovery has been erratic at best. Meanwhile the rest of its economy has taken off, so the country has less need to pander to tourists.

Exemptions remain in force for such things as medical and hi-tech uses.

In the U.S. California, Hawaii and the District of Columbia all have much milder laws limiting plastic bags. Michigan has a law prohibiting local authorities from banning plastic.

Once again, Africa leads the way. Although pursued by them for immediate and practical reasons, it’s not rocket science to expand the problem beyond arbitrary borders. The great “Pacific Plastic Ocean Garbage Patch” is a potential clog on the entire earth far more serious than your kitchen drain.