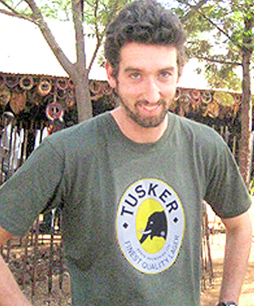 So we’re switching roles slightly for next 7 weeks while I guide several safaris, search out new places and complete some unfinished business in East Africa.

I’ll blog as I can, and certainly detail as I have before the safari experiences my groups are having. You can follow these experiences, here. The posts will all be titled, “On Safari.”

But to maintain the blog’s topical news about Africa, Conor Godfrey has agreed to fill in for me.

Conor recently left the Peace Corps where he was stationed in the boonies of Guinea. The only volunteer for miles, Conor taught, managed community programs and developed a peculiar passion for mangoes.

As he was preparing to celebrate Christmas in 2008, the Guinea military announced the dissolution of parliament in a bloodless coup d’etat.

Things went downhill after that.

I met Conor when his parents extracted him from the wilds of Guinea to join us on an East African safari last June. But except for that brief interlude, Conor became more and more enmeshed in his remote village. He rarely spoke English except to teach it, become proficient not only in French but also in the local Pulaar.

After a brutal massacre of an opposition demonstrators on September 28th, 2008, the country’s political situation became more and more unstable. On extremely short notice Conor and his fellow volunteers were picked up at their villages and driven to Mali.

A parent myself of children whose adventures often terrified me, it’s hard to recommend that kids thrust themselves to the fate of such unforeseen circumstances.

But reflecting on what one knows best, oneself, I know that the adventures of the sort Conor has just returned from are not just invaluable but absolutely indispensable for anyone who wants to truly understand the world outside their own upbringing.

I’m alive. My kids are alive. And Conor’s alive. And thanks to all of that, for the next seven weeks or so you will have the unique pleasure of a younger, fresher perspective than my own.

So enjoy Conor! I’ll be back full-time in mid-April.