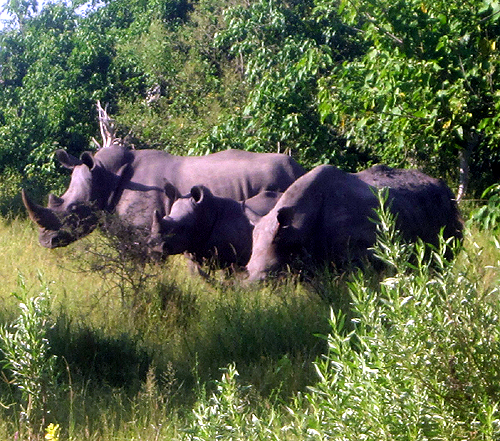 “Hundreds” of rhino will be relocated from South Africa’s landmark Kruger national park in the continuing struggle against poaching.

The announcement was made this morning by South Africa’s minister of tourism and wildlife. It will be one of the largest relocation of wild animals ever attempted.

The park, which is the size of New Jersey, has just under 8500 white rhino and poaching has escalated throughout South Africa but mostly in Kruger and surrounding private reserves.

Rhino poaching in 2007 stood at 13 in South Africa; last year it was 1,004. So far this year despite massive new efforts to curb the poaching including deployment of South African military, more than 500 have been poached in Kruger.

The “white” rhino is a very separate animal from the “black” rhino and the distinction has nothing to do with color: they are both grey. Both are endangered, but the black rhino is much closer to extinction in the wild than the white rhino which thrives in many reserves throughout southern Africa.

Although much bigger than its rarer cousin, the white rhino is remarkably docile and even in its wildest state is approachable and can often be touched. This makes it an amazingly easy animal to poach.

The horns of both rhinos are used identically in Asia for a variety of medical treatments and superstitiously as powder totems.

Although China has moved fast to curb the demand for wild animal parts by its rapidly increasing middle class, the prices for rhino and elephant parts have continued to escalate.

Kruger is particularly vulnerable because its entire eastern border is adjacent a fairly lawless and unpatrolled part of Mozambique. Mozambique is an easy exit for contraband from southern Africa to Asia.

South Africa’s largest rhino reserves, Hluhluhwe and Umfolozi near Durban, have suffered relatively little poaching in the last few years. The presumption is that by removing heathy animals from this vulnerable wilderness and placing them in areas like these, the continued growth in the rhino population in South Africa will be preserved.

As I’ve often written, our current era’s struggle with poaching is considerably different than 40 years ago, when there was massive corporate poaching centered in the Mideast. Today’s poaching tends to be by ad hoc gangs or single individuals attracted by the relatively large sum they can get on the black market for a single horn or tusk.

Last month, for instance, a gang in southern Texas was convicted of illegal gathering of U.S. antique ivory and rhino parts and sending them to China.

Both species of rhino and the elephant are considered endangered species, but elephants survival in the wild as currently exists is much more certain than rhino.