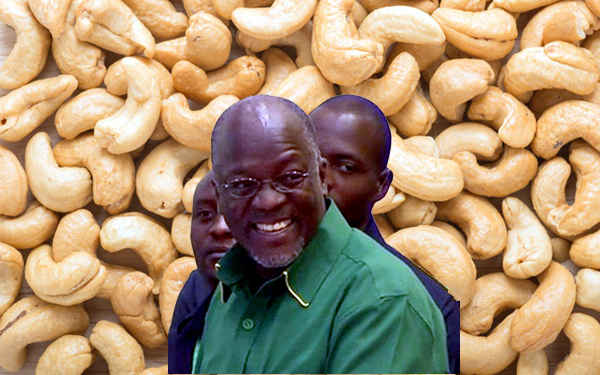 Tanzania’s “bulldozer” dictator plowed into the agricultural arena yesterday slaying down corrupt officials and increasing and strengthening his partnership with China.

John Magufuli’s dictatorial actions should immediately benefit most Tanzanians: Agricultural production should rise, prices for commodities should rise and additional supply should keep consumer prices steady. There’s no way all this “good news” could have been created in such a short time democratically, and there is also no certainty that in the mid- or long-term it’s the right thing to do.

Magufuli does whatever he wants. He doesn’t consult Parliament or any other people’s representatives before doing so. He’s a religious conservative so on human rights his record is troubling.

But on what benefits the common Tanzanian economically, he’s come through pretty well. What just happened in two cases regarding agriculture is a perfect example.

Cashew nuts in the last few years have become the single most important agricultural cash crop for Tanzania, whose agriculture is growing and substantial. This didn’t happen overnight, but grew slowly and over many decades. I’ve enjoyed Tanzanian cashews for 50 years!

The industry developed as many unfortunately due in a corrupt emerging society: opportunistic politicians got involved bit by bit until there was a middleman distribution network for cashews in Tanzania that was more corrupt than the Fulton Fish Market.

In the last few months Magufuli has dismantled the regulatory agencies and distribution network, ordered his army to replace all previous businesses that were involved and to pay farmers 20-25% more than they had been given before.

Since farmers were often not paid the contracts distributors had signed, in some cases it was an effective doubling of farmer income.

This forced Tanzania’s cashew export price up by 10%, and foreign buyers started to retreat.

To mitigate the loss Magufuli struck still another deal with China. China was already a large purchaser of cashews, and it agreed to double its purchases and to build a new cashew nut processing plant.

Tanzania – like so many African countries – maintains a massive debt to China that has built most of its recent infrastructure. There are multiple ways that China could make this a very successful financial deal by integrating some of its current debt-holdings.

The global market has started to react positively and return to buying Tanzanian cashews, undoubtedly because China as by far the biggest purchaser begins to manipulate the market. And Tanzania has assumed additional, huge debt to China.

And farmers are ecstatic.

There is no way Parliament or any of the now defunct or disappeared regulatory agencies would have come up with this deal. Even were Parliament now composed of corrupt politicians benefitting from the old regime, clear-headed economists see this as but further control of Tanzanian life being ceded to the Chinese.

Then there is the matter of GMO. In the western world antipathy to GMO is very granular and scientific with concerns centered on the dangers of manipulating nature. I’ve written a lot about the GMO controversy in Africa, where particularly with regard to drought-resistant corn, subsequent unexpected needs for additional pesticides have taxed African economies.

But in the category of what’s good right away, drought-resistance corn is absolutely beneficial to Africa and even the Bill Gates Foundation has funded massive distribution of the patented seed.

That attracted a lot of corruption in Tanzania. Outside, mostly U.S. consultants, started to control GMO agriculture and the right-away benefits allowed them some sizeable Christmas gift giveaways.

This week Magufuli had enough. He fired scores of officials, ordered the Tanzanian agency charged with studying GMO to destroy all of its findings since its inception, gave notice to the U.S. consultants that they were getting very close to being arrested, closed down all scientific studies in universities and parastatals and … banned GMO agriculture.

You can’t do that democratically. I and other conservationists think it might be a very good thing for the greater Tanzanian ecology. It will undoubtedly hurt Tanzanian farmers and consumers, both in terms of supply and prices, but Magufuli’s popularity and his reign on power is now so complete that it will not jeopardize his situation.

Magufuli is operating as his own little China. China is pleased. Most Tanzanians are very pleased. We democrats and human rights activists on the outside are troubled. But what is more important? Free speech or fair prices for cashews?