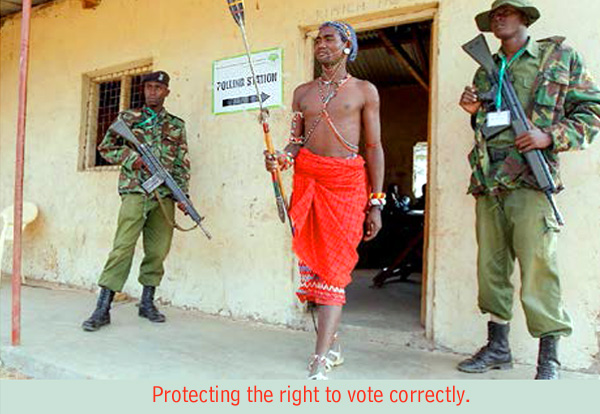 Ultimately it’s a matter of whether the people in power are good or bad. Doesn’t really matter whether they won an election or ascended a throne, whether they’re an elected judge or an appointed one. They’re either good or bad.

But as multiple African countries show, today, there’s a lot of bad running democracies. Listen quick: I’m not saying authoritarian regimes are better than democracies. I’m just saying there can be just as much badness in democracy as in authoritarianism.

Obviously this is a simplification but it represents more truth than not. It’s hardly good that you can’t speak your mind in Ethiopia or Rwanda without risking jail time and torture. Democracy has pretty much safeguarded freedom of expression in South Africa and Kenya.

Nothing encapsulates this better than the great slogan of the great state of New Hampshire: Live Free or Die.

But the moment-to-moment peacefulness, and the overall economic advancement measured especially in terms of growing literacy and reduction of poverty, is much greater in Rwanda and Ethiopia than in South Africa or Kenya.

In two weeks Kenya reruns the national election it held on August 8. I don’t think there’s any other democracy in the world, today or ever, which has put so much time and money and national energy into the democratic process.

Every part of society is 100% involved: the courts, Parliament, the police, the Army, the 5th estate of free media, and virtually every major business. Every citizen as well has donated a big hunk of their lives to redoing an election that by virtually every one of the thousands of outside observers for the election on August 8 said was free and fair.

Because it wasn’t free and fair enough?

The outcome will be the same. For one thing the principle antagonist in this rerun, the candidate who lost the first time around, has withdrawn from the race.

Everybody knows this is because as “freer and fairer” that the process has become, he still won’t win. His attempt to achieve power had to begin by unearthing some of the flaws in the counting process, and as in most elections, there were many.

When he achieved this – I believe beyond his wildest dreams – he was stymied by what to do next: Run again and lose in a freer and fairer process?

Bad people run Kenya, and this man would have been just as bad as those he tried depose. Kenya’s leaders are bad for a lot of reasons, mostly because they transparently favor their own tribe over others, and equally because they’re feathering their personal beds.

I don’t think there’s another democratic country in the world as frustrated, now enervated, as South Africa. Its leaders are bad, real bad. They break laws, thumb their nose at the courts and legislature, enrich themselves with public coffers, re-enforce black and mafia markets …and still get reelected!

This social affliction, the reelection of bad leadership over and over again, is democracy’s cancer.

So there’s a lot less to report in Rwanda and Ethiopia. Mainly because reporting is illegal. It’s rather quiet in Kigali and Addis Ababa, where GDP is soaring, literacy is topping out pretty high, dams are being built and fiber optic cable is being laid border to border.

By the way, there are bad people running non-democratic countries in Africa: Zimbabwe and Uganda chief among many. There are also a few good people heading up democracies, especially in West Africa and maybe even now, Angola. So it’s not a universal distinction.

And by the bye way, with regards to Trump? ‘Live Free or Die’? That’s crazy. Puerto Ricans don’t have Congresspeople so that they can have uninfected drinking water. What are we doing now? Giving them more freedom along with deadly water?
Today all the expression means is “Live Free To Die” …and sooner than you might want.