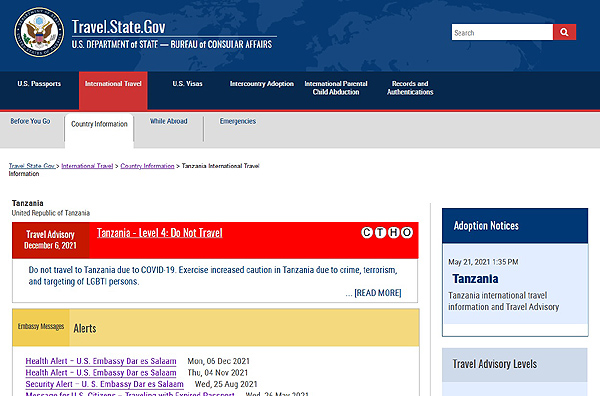 What is “mild?” Should you go on your trip?

If mild is a runny nose then continue with your safari by all means, if you’re able to run the obstacle course now set out for you. If mild is debilitating enough to compromise a certain amount of enjoyment from what you’re doing, then it’s silly to go.

Expect a lot more information next week to enlighten us further on what is “mild.” Ultimately, you have to decide if “mild” is mild.

Then, apart from the miserable virus itself there’s the government reactions to it. Several days ago the State Department redlisted Tanzania, that means raised its cautions about traveling to the highest level, a Level 4 “Do Not Go.”

A few days later the tourism industry in Tanzania began to implode. When I went a few weeks ago there were only two large tourist chains left on the whole Tanzania safari circuit, excellent midmarket companies, Serena and Sopa.

Sopa announced today it was unlikely that some of their lodges will reopen for business before June, 2023.

This is a sober but reasoned prediction that there will be no midmarket safari travel to Tanzania for at least the next 18 months. I hasten to add this doesn’t necessarily mean that the Sopa executives believe that the virus will prevail that long, rather that given what can be speculated about the virus right now in business terms, there will be no midmarket safaris for at least a year and a half.

They believe you will not think “mild” is mild.

Other companies raced in the last few days to let all of us operators know that they are essentially throwing out all their existing terms and conditions. EWT is scrambling to put this into detail, but anyone who’s paid anything for any safari service has a certain bargaining leverage as a result of the world closing down and Omicron opening up.

So, for example, the CDC gives Kenya a Level 1 pass on Covid, the lowest possible. This means the CDC doesn’t believe the risk of getting Covid is great enough to restrict traveling there. But the State Department gives Kenya a Level 2 “exercise caution” because of “crime and terrorism” which I’ve often criticized before as unwarranted and overly cautious.

The CDC ratings are statistical triggers. The ratings of the State Department are subjective.

Tanzania, however, gets a Level 4 from both the State Department and CDC.

Then consider this. Morocco gets a Level 1 from the CDC but a Level 4 from the State Department. This is entirely because the Moroccan government, which has done such an excellent job keeping Covid down in its country, closed its borders entirely to the outside world the end of November when Omicron was discovered.
‘
The State Department Level 4 “Do Not Travel” to Morocco has little to do with anything except the bare fact that you aren’t able to travel there because the airport’s closed. The failure to clearly explain this confuses users of the advisories.

Personally I use the CDC site often, but the State Department site has not been well collaborated for more than 20 years, when the embassies in Nairobi and Dar-es-Salaam were blown up by terrorists. Since then the State Department has erred on unwarranted caution. Much better to use the sites of Britain or Canada.