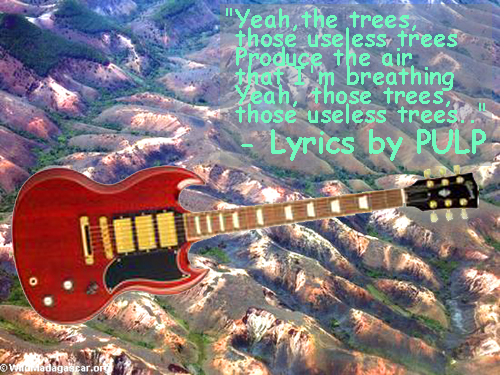 Gibson guitars and an African dictator, a major conservation group, U.S. Fish & Wildlife, and yes you guessed it, the T-Party, are banging out country and western lyrics headed for the Grammys. Dissonance par excellence.

I own (I think, my son took it about 10 years ago) a beautiful Gibson guitar which I played badly for years. Like most pseudo-musicians, my signature sound was volume. And despite repeated attempts to destroy the guitar, it remains in tact. Why? Because of its extraordinary craftsmanship and precious rainforest wood.

True musicians can hear the difference between a guitar they play using rosewood or ebony, and less rare versions of wood like binga.

He says it’s all a matter of the way the wood handles humidity. Obviously wood from high humidity places like … well, say, Madagascar rainforests … handles humidity a lot better than wood grown in Canada.

Turn on your speakers and click here for the sound of a rosewood guitar. Billy D & The Hoodoos, a Portland group, are among many who claim they are worried now about traveling with their instruments over international boundaries.

As they should be. We can’t have it both ways, folks. (Although, read further down, it seems like everyone is trying to on this one.) If you believe that elephant ivory should be confiscated and traders across borders prosecuted, then the same should be true for Madagascar rosewood.

Rosewood (Leguminosae Fabaceae) and elephant (Loxodonta africana) are both found on Appendix I in the CITES treaty. Which means you cannot take those products across international borders.

CITES is that near perfectly functioning, marvelous world treaty that protects endangered species.

The reason is so simple it defies criminality. Wherever those things exist (elephants in Africa; rosewood in Madagascar) they are dying out, or will die out if not protected from commercial harvesting. So … leave it be.

The reason I want you to watch this video is because it was made in 2007 by a respectable conservation organization regarding their project to protect 10 million acres of Madagascar rainforest by 2010.

They failed. In fact, they failed miserably. About the same amount was logged, instead. They failed, because the Madagascar government was taken over by a hipster strongman who prior to siccing military on demonstrators was a young, popular Tana DJ who scratched vinyl with little regards for the tonality of sound. He has approached his current job in the same way.

Madagascar is, ergo, a mess. Mostly a decimated mess of scorched earth.

But it takes two to tango. Somebody’s got to buy the wood. Gibson knowingly violated the law. Why? For two reasons: (1) because rosewood makes such a pretty sound, and (2) they figured they could get away with it. So far they’re right on both counts.

Whether you believe in the whole morality of the CITES convention (as I do), certainly the issue of law is universally compelling. Right now, it’s against the law (worldwide) to buy Madagascar rosewood. And so, let it be. Or, change the law. Or, opt out of the treaty.

So although I have enough music still lingering somewhere deep inside and can definitely tell the difference between Pavarotti and Domingo, and probably even appreciate Billy D’s rosewood grace, if I’m a law abiding citizen, I’ll lobby Billy D not to take his rosewood guitar when he performs in Vancouver.

But… guess what. Gibson is not being prosecuted. U.S. Fish & Wildlife, which is responsible for preparing the prosecution for any violation of CITES, hasn’t acted on a judge’s instruction in the case, effectively putting the whole case on hold. It’s Fish & Wildlife’s move, and they don’t seem very anxious to do so.

And desperately in search of a political win, the T-Party has now “rallied” to Gibson’s side. I didn’t know Nashville extremists went further than murdering mothers-in-law.

Gibson is not being prosecuted.

Music is a dangerous stage on which to fight politics. But when CITES was adopted by the U.S. under the Reagan administration, Fish & Wildlife actually steamed off ivory keys from priceless pianos sent in or out of the country. Pianists have come to accept this.

Gibson has pursued raw materials with the same abandon as many of its pea-brained singers. Not just Madagascar rosewood, but also Fiji ebony. Both places are run by dictators intent on little more than making a buck for their families, who care not diddly squat about their fragile island ecologies which are ready to disappear.

Both appreciate Gibson’s business. It would make a very good country and western lyric.

After Fish & Wildlife revealed the investigation was taking place of Gibson’s interests in Madagascar, Gibson terminated its relationship with the Fiji devils. But it intends to fight the ban on Madagascar rosewood.

How? On what basis?

And then another strategy that seems to be working: Get T-Party-ers to scream veiled obscenities at Obama and be covered by FOX. And that fight seems to be working, too. Obama, as the old country and western tune opines, might just be that sheep in wolf’s clothing.