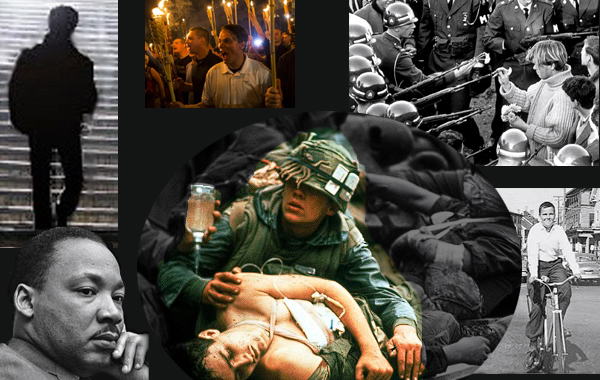 Twenty years old I thought I was an up-and-coming journalist albeit of a different kind. Because the Movement into which my age conscripted me was winning. We young, naive often reckless kids were actually stopping the war in Vietnam, and we “journalists” played a proactive part in bringing that about.

Why am I writing about this on Martin Luther King Day?

Mid-January in Washington D.C. is not exactly an uplifting place, especially for a kid with only two sets of clothes, one pair of shoes with a slit letting in snow above the right big toe, who was earning $185/month from the forever-to-be-forgotten “College Press Service.”

It may even have been on MLK’s birthday that I wandered into one of the several English basement hangouts around Church St. where we activists gathered to share donated pizza and other more stimulating nourishments. Only I wandered into what seemed like an intentionally poorly lighted room where … everyone was black.

I stopped dead in my tracks three stairs above the English basement floor. The weight of a bunch of black faces all turned on me was like a steel wall. I turned around and walked out. I knew the Panthers had a hangout somewhere nearby and we often had meetings with SNCC. But I had never walked alone into one of them before.

There were all sorts of divisions in the Movement. I was a part of the more moderate Sam Brown NCA (National College Association) wing. There were a dozen wings – or more: you probably remember SDS and the Weathermen, but there were many whose names even I’ve forgotten. We occasionally came together, as for the Moratorium, and we often screamed at one another. Usually the arguments were about policy; sometimes about violence.

But we rarely locked horns with … nonwhites.

For a while my boss was the former editor of the University of New Mexico student newspaper. In one lose drunk in a Washington bar while we watched the moon landing, he suddenly felt so empowered and elated that he grabbed me by the shoulders and asked in a loud whisper, “If I tell you something, can you keep it secret?”

He smiled widely before saying softly while pushing his face towards mine, “I’m a Latino!”

You know what? I didn’t know what that was. I’d always wanted to go to Paris and to live in the famous “Latin Quarter” but he just didn’t seem French.

I knew who to call in the FBI’s record office to find out where Hoover was next deploying police. I had enough dirt on Bob Davis to blow-up his attempt to infiltrate our student newspapers. I discovered enough public papers to practically get the Sheriff of the county in which my university was located prosecuted for embezzlement. I even knew the names of all the little towns around Prague where we had co-activists and the back streets of Madison where I could hide my photographer during a police riot. But … I didn’t know what a Latino was.

I replied, “Congratulations!” and we clinked mugs.

Exactly three years before I nearly walked into that panthers’ den, I was in Baltimore competing as a National Science Fair finalist. Everyone was white. I was representing Jonesboro, Arkansas, my town during junior and high school. The only nonwhite I ever saw was Bessy Mae who cleaned our house once a week. She was a quiet, frail old lady. We never talked much.

Back then and even now a quarter of the population of Jonesboro is nonwhite. I rode my bike down the main street of Jonesboro a thousand times. There were no blacks, there. Memory is not always truthful. But it is certainly revealing.

Exactly two years before turning tail on that English basement, a straw broke the camel’s back of my university career as I suffered through the measured rants of an “esteemed professor” arguing for the Vietnam War. He was in a dangerous minority at an activist university, something I could not appreciate because he seemed so totally absurd. It was a huge lecture class. I looked around to see if anyone else was upset. There were plenty. But today when I rerun that memory I can’t find a single nonwhite face in that stadium of learning.

A few days after leaving the black basement I was in the back of a crowded room where representatives from SNCC and our group were in a shouting match that got very heated with a bunch of people exchanging all sorts of racial epithets. It was a discussion about the draft. Nixon had won on the issue: many more soldiers were going to be conscripted, deferments slightly abated but hardly ended, so no national lottery.

I was terrified of being drafted, committed to burning my draft card and escaping to Canada. We thought we could end the war which meant ending the draft. They laughed so hard: maybe the war will end, but the less privileged will always be conscripted into servants of the privileged…

So boycott, then! More laughter that turned threatening: if all you white kids skiddle off to Vancouver who d’ya think’s going to die in Nam?

Our group left the meeting humiliated but introspective. It took us several days to gather our wits. Those were the greatest days of meditation in my life. Suddenly, the world seemed upside down. How ridiculous to suppose an all black fighting force in Nam; Nixon would never do that. Or would he?

So we made the agreement. We promulgated a 180-degree reversal of our previous policy, calling for a lottery that implicitly sanctioned the draft. There’s a lot more to the story. Hoover had spies in our bedrooms. He coopted our morality and adopted our position before we could adequately publicize it, defeating its impact.

But the story isn’t so much about the story, but why it almost didn’t happen. Twenty-year olds are still forming their moralities. Two days of ruminating on an epiphany isn’t on the calendar of most twenty year olds, so that in itself was weird. But I think all of us individually and very humbly concluded that while we weren’t actively racist, we were nurtured by a culture that was.

SNCC’s power derived from loud protest. SDS from violence. Our power derived from our privileged position in the culture we wanted to change. “Change from within,” you know. The greatest hazard with this is that if you’re smart enough it’s often easier to change someone else’s mind than your own.

A half century and four years later with a large chunk of my adult life having been spent in Africa I still stop three stairs above the floor when my eyes like super magnets clasp immediately on every nonwhite in the fore. I don’t hesitate or walk away like I did before because I know now what’s right. But those feelings of a 20-year old don’t go away. I have to power through assumptions of difference, constrain a personality that developed in the theatrical kindness of Bessie Mae.

It’s not easy, but it is successful, and one thing is certain: My children aren’t like me. So thank you SNCC and Dr. King and John Lewis and the Reverend Al and even Bessie Mae, and of course, Africa. The world might be ready to commit suicide, but its epithet will read a little bit better than it would have a half century ago.