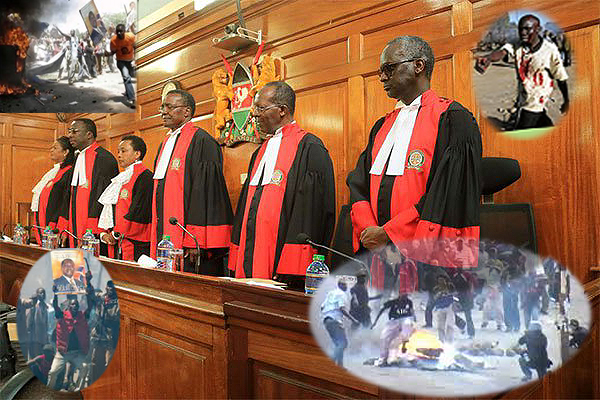 Diplomats and experts alike are hailing Kenya’s Supreme Court for its decision Friday annulling the national elections as proof that this dynamic emerging nation has firmly sided on the rule of law.

I see it differently: another example that democracy is growing self-destructive. With opposition candidates already declining to take part in the announced election rerun, the chances for widespread violence and major political disruption are now greater than ever.

I was in Nairobi when the incumbent president seemed to pull off an impressive defeat of his perennial challenger, winning the national vote by more than 10%. Down the ticket there were major upsets and stark surprises as well, but at the end of the day everyone thought the process was free and fair.

More than a thousand certified foreign election observers, including America’s John Kerry, praised the election and congratulated the victors.

As expected opposition supporters rioted. Twenty-four people died in police confrontations but the protests were short-lived and very localized, wholly unlike the disaster of 2007. By last week it seemed all had returned to normal in Kenya.

Then Friday the Supreme Court annulled the election.

The Court did not rule that the election result was inaccurate. Rather, it ruled that the process for verifying the electronic results on which the election was called fell short of constitutional mandates. The Court found approximately 11,000 of 34,000 polling stations had not returned the certified paper ballots to the central election authority to corroborate those stations’ earlier electronic submissions.

And that’s true. And while that delimiting verbiage does not itself appear in the constitution, it is an explicit rule created by the election authority that Parliament set up to run the election:

A technicality that theoretically could reveal serious and managed corruption of election results. The Court wasn’t adjudicating the accuracy of the result, but the process by which it was determined.

I continue to believe the election result reflected the will of the people, as technically flawed as it may have been, and I repeat this conceding that I had supported the opposition candidate. But of course, the Court is right on the technicality.

The extraordinary threat by the incumbent, Uhuru Kenyatta, to “fix the court” so it won’t do this, again, is not only crass and politically immature, but an obvious suggestion that the technicality may in fact reveal deep and managed corruption of the results.

The Court ruled that new elections must be carried out within 60 days. Although it’s unclear how The Court came up with this time frame, as a part of the final ruling it can’t be challenged.

The opposition candidate has rejected this time frame, together with a rejection that the authority that ran the August 8 election be the same authority to operate the rerun.

That puts the country at an impasse, a dangerous stalemate. It suggests The Court is unable to remedy the process by simply righting a flawed technicality, and it suggests the opposition doesn’t think it could win even under a more perfect process.

Speaking for all of us optimists, the New York Times apologized Sunday for having been “too quick to dismiss charges of irregularities.”

I’m not sure, though, that the Times explanation for its ‘quickness’ is shared by the rest of us :
“… a relief that the Aug. 8 voting had been mainly peaceful and in the hope that disappointment with the results would not lead to the sort of violence that erupted after the disputed 2007 election, in which hundreds of people were killed.”

High-minded analysts in Nairobi like Rasna Warah claim, “There have been few moments in the past decade when I have felt truly proud to be Kenyan” because of the ostensible primacy of the rule of law. High-minded media like the Economist argue “Despite the short-term disruption, [an election rerun] would be worth it” because it would validate the election process nearly incontrovertibly.

All this may be theoretically true. But if the greater truth, that the election was accurate, is now subsumed by an obsession with perfecting irregular technicalities, the fabric of Kenyan society may be tested to its very breaking point.

Nothing is perfect, least of all democracy. In this lightning speed hi-tech, globalized world, technicalities achieve primacy over substance. Trump wins for losing. Uhuru loses for winning. The very nature of democracy – achieving consensus from opposing viewpoints – is upended by its imperfections.