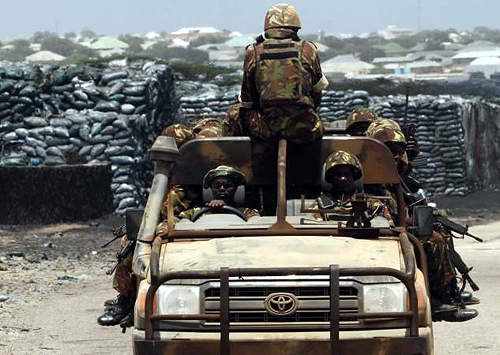 Just as Kenya was doing everything right it arrests a journalist for uncovering corruption, while the Kenyan army that Obama built to route Somali terrorists turns out to be in cahoots with the terrorist leaders!

When will Kenyans stop being on the take?

The government’s interior minister oversaw the arrest Tuesday of a prominent Kenyan journalist who’d uncovered possible corruption in his ministry. The backlash was swift, the journalist was released, the minister comically claimed he hadn’t order the arrest, but the damage was done.

And today another courageous group of Kenyan journalists released a scathing report linking Kenyan occupying forces with the illicit half billion dollar trade in sugar and charcoal that had hugely financed Somali pirates.

Interior Secretary Joseph Nkaissery oversaw the arrest Tuesday of Kenyan journalist John Ngirachu. The journalist had discovered a multi-million dollar hole in Nkaissery’s budget that was unaccounted for.

By the time police brought Ngirachu to the station, the outcry in Kenya was so loud that he was simply kept for a short time and not even interrogated before being released.

Then yesterday, acting as if this was all news to him, Nkaissery ordered the “end to any investigation” by journalists claiming he knew nothing about it.

It’s so lame. Just before the arrest Nkaissery told Reuters that Ngirachu’s reporting was “unacceptable” and “calculated to harm the nation” since it portrayed his ministry as corrupt and that it was a trend by journalists “increasingly taking the shape of a larger plot of economic sabotage.”

We often scratch our noggin wondering how in the world corrupt politicians think they can get away with it. Well, in Kenya you have to scratch all the way through the scalp to wonder how this guy would think just by denying what he had just said to a worldwide news agency, everything would be fine!

Today Kenyan soldiers are paid well and are well equipped, because of our own dear Obama. I’ve written critically many times about the Obama war effort in Somalia. We Americans built, funded and trained the Kenyans to oust the Somali warlords that had more or less run that evaporating country for nearly 20 years.

And they did a great job.

According to the Kenyan Journalists’ report, “Eating with the Enemy,” the Kenyan occupying soldiers have struck a deal with what’s left of the al-Shabaab they were supposed to nuke.

They are splitting about $24 million annually through illicit exporting of charcoal to the Arabian peninsula.

Charcoal burning stoves still fire many of the homes in the Arabian peninsula, where there aren’t any forests. Somalia has been deforesting itself for decades to supply them. So this isn’t just an illegal and corrupt act, it’s raping the planet.

But the Kenyan soldier scandal doesn’t stop there. Putting together UN reports with other Kenyan journalist reports, Nancy Agutu of Kenya’s Star wrote today that $400 million is being earned by the Kenyan soldiers and their middlemen back home for the illegal importation of sugar from Somalia.

There are so many angles to this story it’s hard to parse: America once again duped into trying to do good with military means; the ongoing rape of Somalia’s earth even after the war is stopped; the corruption of Kenyan officials high and low; the demand for charcoal in a modern age…

Only one thing is clear. There are some really good, possible heroes among Kenyan journalists.

One of Kenya’s most famous anti-corruption activists, John Githongo, told Reuters recently, “This is the most corrupt Kenya has been since we began measuring corruption in the ’90s.”

Kenya has been working so hard recently to combat crime and corruption, to work through their new constitution, to deal with the Somali crisis at their borders and stem terrorism … that’s it’s simply a crying shame that idiots like this minister and cowboys in the army we built would try to blow their future to smithereens.