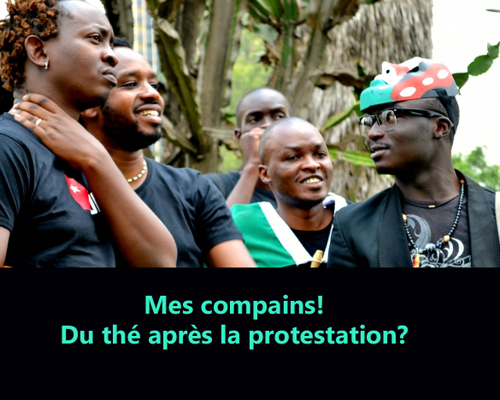 A pitifully small yet very well organized protest in Nairobi yesterday was squashed by dozens of police using teargas as Kenya moves more and more into the darkness.

The protest was mounted by a group of sophisticated, highly educated and talented older Kenyan youths including some local music celebrities and disgruntled journalists, who seem well organized and funded.

In fact the Kenyan foreign ministry immediately accused the U.S. government of bankrolling the protests as soon as police had dispersed them.

The U.S. strongly denied the accusations and called for an immediate meeting with government officials to officially clear the air. Yet I found in the ambassador’s remarks a slight nod to the protestor’s complaints if not actions:

It’s true, our ambassador said, “we work with a variety of social organizations.”

This group was in Gucci outfits with perfectly minted protest signs and some impressive props: giant SpongeBob like balloon things that were supposed to represent corrupt officials.

Despite their “business persons smart-casual” look, the protesters used rather juvenile tactics. Diapermentality.com was the ostensible organizer of the march. Spyce magazine was another supporter. These two very new and very sophisticated sites are technically polished, very well funded and well, just sort of juvenile.

Some of the phrases on the protest signs like “Who Killed Mboya?” represented generation-old issues that really have little to do with the present. Leaders, however, were trying to form a theme that Kenya is 50 years old but still in diapers, in part because these old issues were never resolved.

The titular heads of yesterday’s protests were a punk cleric, Timothy Njoya, and a former Kenyan journalist on a rampage, Bonny Mwangi. The two are perfect examples of where Kenya’s protests are going today … to the bank.

Joining the minister and journalist leading the protest yesterday was a famous Kenyan band leader, Sarabi. Together the three represent a highly privileged and successful but increasingly frustrated class of soon-to-be middle-aged Kenyans truthfully fed up with their government.

And incapable of doing anything about it. Even as they personally prosper.

But the Kenyan government’s reprise that the western world and America are to blame is comic. The last thing the Obama administration wants to do, now, is jeopardize its drones over Somalia, dependent completely on Kenya’s full participation.

The police response to this pitiful protest is troubling. It’s equally troubling that Kenya’s largest newspaper didn’t cover it (except in a photojournalism essay), leaving it to newer and more courageous local media and one good radio station.

An effete protest it was, in a troubled and darkening society.