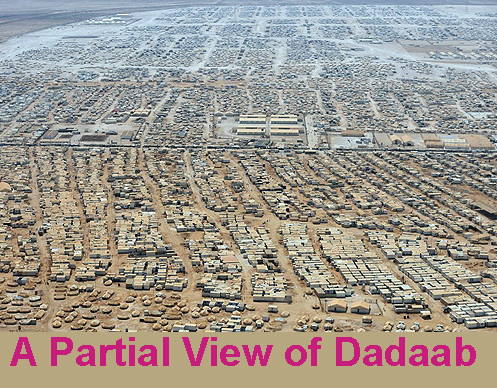 Dadaab is now the largest single refugee camp in the world. There are nearly a half million people in a “camp” operated and maintained by the United Nations.

Imagine if Grand Rapids, New Haven, McAllen or Toledo – each an American city with about a half million population – were a “camp.”

Here’s an equally frightening way to look at it: compared to America’s and Kenya’s total populations, a refugee camp of similar size in America would be 3½ million, the size of Seattle, Minneapolis or San Diego.

The cost of maintaining Dadaab is paid by the United Nations, which in turn gets its funds for this specific project mostly from the U.S. and Britain. It isn’t just putting up tents. There are schools, churches, entertainment centers, telecommunication and power (electricity) facilities, security vehicles and buildings, waste treatment facilities, and potable water facilities in what is essentially a desert.

The cost is staggering, but Kenya insists the cost to its own security is even greater. It wants the UN to close Dadaab and repatriate the half million people – almost exclusively Somalis – to Somalia.

Somalia is doing better than ever. There are fewer violent attacks in Somalia than in Iraq or Afghanistan. Kenya’s argument is that the situation in Somalia is now peaceful enough to close the camp.

Needless to say, there are many who disagree, including probably all of the refugees in the camp. The fact is that life in a UN operated refugee camp is considerably safer, usually healthier, and often with better education opportunities than in many of the towns and villages in northeast Kenya where the camp is located.

It would be one thing if Kenya were making this decision separate from its overall policy towards Somalis in the country. There are more than 4,000,000 ethnic Somalis in Kenya who are legitimate Kenyans, many who have resided here for several generations or more.

Since the Somali invasion by Kenya in October, 2011, Somalis in Kenya have been terribly mistreated. In fact, according to a Kenyan government report four years Somalis have always been discriminated against! The invasion made it worse.

Consider this: a refugee from anywhere, a Libyan fleeing to Italy, or a Guatemalan fleeing to the U.S. or a Somali fleeing to Kenya, these are people who don’t want to fight. They are escaping conflict. They give up whatever and however little they have … for peace and security.

Closing Dadaab will infuriate and radicalize the youth currently living in the camp. Many Somalis in Kenya already have been. The “mastermind” of the Garissa bombing is a youth who grew up in Kenya and graduated from a Kenyan law school with honors.

The rationale Kenya gives to closing Dadaab is that terrorists are bred in the camp who regularly harm Kenya, yet there is to date no evidence of this, and it is simply counter-intuitive to the nature of a refugee.

The truth is that one of the greatest causes of the terrorism Kenya is its treatment of ethnic Somalis living in the country.

The handful of infiltrators that manage to infect every refugee camp in the world is real but so small it’s ludicrous to suppose they wouldn’t infect small towns and villages in Kenya the same way if Dadaab didn’t exist.

In other words, closing Dadaab will not impede this dynamic an iota.

What it will do is increase hostility, mistrust and fire the conflict even further. It’s one of the worst decisions Kenya has ever made.

Jim’s award winning novel, Chasm Gorge, set in Kenya, tells the story of a kidnapping by terrorists of the son of the man who wants to become the President of the United States. The book is available online in e-editions, soft and hard cover, from Amazon, B&N and bookstores around the world.