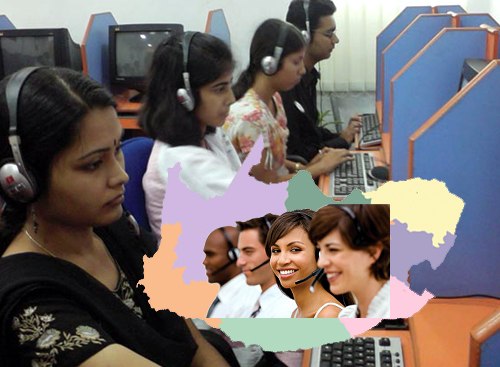 Ready for someone at the Help Desk to really help you, maybe even in English? It may happen, and you’ll have South Africa to thank!

Huge grants from Microsoft and the Rockefeller Foundation among others are working their way through the South African system to help its worldwide call centers grow quickly enough to meet demand.

South African call centers are the Dyson vacuum cleaner in the consumer help desk market. Their quality is unrivaled, but their expense is high and as a result for years their growth has been anemic compared to major rivals like India.

The reason is pretty simple: The South African per capita income is nearly three times that of India ($11,500 compared to $4,000 according to the World Factbook.)

The metric is useful because it translates almost exactly into what a call center in one country costs versus on in a different country, including the largest single component of cost, salaries.

But in the last few years, American companies in particular have begun to react to bad reviews of their call centers.

“Consumers are fundamentally unhappy with the state of customer service,” a widely cited April survey of call centers concluded.

You knew that! Purdue University discovered this more than a decade ago: Poor call centers more than halve an otherwise expected product repurchase rate by a consumer (78% vs 32%).

Nevertheless, the cost savings of a distant land’s call center for the last decade were actually considered more important. And since virtually all of your competitors were doing the same, the sting was spread around and diluted.

That was the case … until a few years ago. The consumer public simply started to get fed up. Competitors emerged from the Great Recession with cash reserves, and better call centers seemed a promising sales point.

South Africa has had a vibrant call center industry for more than twenty years. But it’s never been large, because it’s been expensive. Roughly 30,000 individuals have been employed rather steadily in these centers.

“We have [lately] had to focus more on skills development than on marketing,” a leading spokesman for the industry recently told South Africa’s Financial Mail.

In other words, not enough employees available to work.

The pace at which global companies are now requiring better service from their call centers surprised the South African industry. Demand for South African centers now requires nearly 60,000 employees, or twice as many who are currently trained.

As a result, the industry is now poaching employees from the hospitality industry. Pay as a consumer visible employee in areas like hotels has never been high in South Africa, so the fit seems good.

And helping out are the American companies who prefer the South African worker to the Indian worker. Microsoft’s huge grant may be self-serving, but the Rockefeller grant is more general.

The half million dollar grant from the RockefellerFoundation is specified strictly for the training of disadvantaged youth.

And call centers are actually coming back to the U.S. In a perfect example of a capitalistic world that for once seems to be working, a major Indian call center company recently announced opening up a call center in Dallas that will employ 1,000 people.

So for the time being, the entre is open to South Africa. And frankly, with the highest child poverty rate in America in Dallas, I think I’d rather opt for a South African kid from Port Elizabeth telling me how to reboot my system than a roper from Ft. Worth.