Heifer may be one of the better charity-direct not-for-profits for Africa, and then again, it might not be.

I am often asked for recommendations of charities serving Africa, and I am often asked specifically about Heifer.  There are actually two “Heifers”, and here are my thoughts and some background.

The Heifer Project International (“Heifer”) was founded in Little Rock, Arkansas, in 1944 by an Arkansan who had just returned from the Spanish Civil War.  Dan West was deeply religious and had been deeply impacted by the terrible and mostly pointless war in Spain.  He grasped upon a Christian biblical maxim that it is better to teach a man to fish, than simply to give him a fish to eat.

Today Heifer is one of the more prominent aid organizations in Africa.  It is on the Forbes Ten Best Charities list and recently received a generous contribution from the Gates Foundation, which is probably the lead NGO in Africa.

For relatively small contributions, the organization buys livestock (sometimes trees and other plants) and gives them to individuals mostly in Africa.  The bulk of the purchases are dairy cows.  The idea is that the individual receiving the gift will learn to tend the animal, harvest its milk, and hopefully breed it.

Because a cow today in Africa averages only $120, the charity has especially appealed to school groups where children are able to actively participate.

The Heifer idea has few direct critics, mostly animal rights groups.  From my point of view, its basic idea is a sound one.

So what’s the problem?  As usual, it’s in the administration of the idea, rather than the idea.

Towards the end of the 1980s Heifer found itself in serious difficulty.  It began requesting upwards of $250 for a cow that then cost about $80.  The problem was with the Arkansas administration and it was remedied, more or less, fairly quickly.

One of the ways the organization remedied the “cost drift” was to start a second organization, the Heifer International Foundation (the “Foundation”).  By separating the actual project funds from the growing needs at administration, Heifer was able to maintain good ratings.

But the Foundation is another matter.  Navigator rates that as only two stars, a numerical rating of 46.7.  Almost a third of all the funds going into the foundation are used for administrative expenses including salaries.  By then taking on some of the otherwise administrative expenses that would be required to run Heifer, the Foundation takes the hit and lets Heifer get another star.

This is clever, and deceptive.  It should be a warning to those who give that the organization is unable on its own merits to attain what it feels is an acceptable level of accreditation.

Heifer is a very secretive organization, held very tightly.  That’s probably one of the reasons that Forbes and the Gates Foundation like it.

On May 21 of this year, the CEO of Heifer resigned amid a scandal that even until today has not been revealed.  The details are still with a sealed grand jury in Arkansas.  The rumors are that then CEO Janet K. Ginn was forced out of her position by the Heifer board for some sort of plagiarism. That’s all we know as reported in Little Rock newspapers, and it remains an unsubstantiated rumor.  But the Heifer Board has refused to deny it and Ginn’s attorneys are refusing to let her say anything.

It could be something really unrelated to the mission or work of Heifer, but that we won’t know until it goes to trial.  And if Ginn settles, we might never know.

Personally, I come down very hard on attempted charities for Africa.  I have worked and lived there for too long to have come to any conclusion except that things are getting worse in Africa.  So whatever the world has been doing has not been right, or mattered.

What is “right” is a much more complicated issue, but it begins not with a small donation and a checkbook, but with government to government actions.

Governments, ultimately, are accountable.  Heifer seems to be trying to avoid accountability. 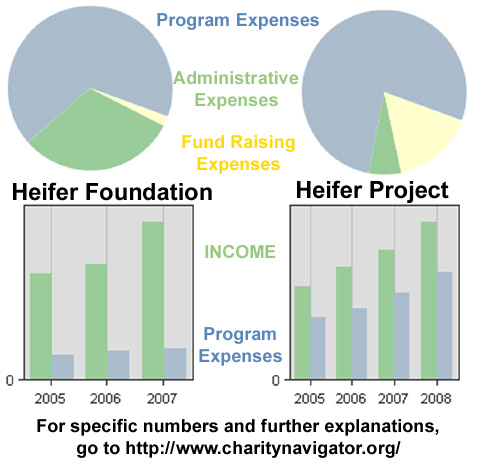