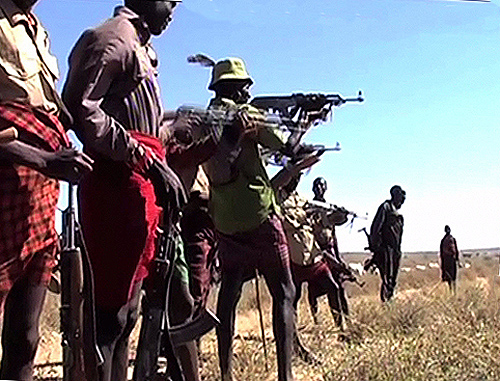 Since the incredible arming of Kenya by the Obama administration for the Somali Invasion four years ago, the number of weapons in northern Kenya has increased by a ridiculous amount. It’s particularly noticeable now that the war is winding down.

So all the tens of thousands of unused machine guns and grenades have reached the black market and they’re available for a song.

The Samburu district of Kenya has always had a sort of wild west flavor, including messy cowboy entanglements. For one thing it’s where two historically antagonistic tribes, the Turkana and Samburu, meet.

Both tribes hold creation myths stating that God created cows only for them, so if the other tribe has cows, they must have stolen them. The young warrior class is charged with recovering as much of these stolen goods as possible.

So cattle rustling has existed at least for as long as anyone has written about the area, well back to the 16th and 17th centuries. It’s different, now.

To begin with, there’s more competition. There are more people, so more food and more cows are needed at the same time that climate change is exacerbating the desertification of these northern areas.

So while it used to be pretty much an ethnic conflict between two or three major tribes, today the issue of enough land for grazing is just as important.

The Kenyan government is moving perhaps too quickly to ameliorate this by generating new local revenue from deep-hole oil wells financed by the Chinese.

But the most important difference is how people fight.

Instead of using spears and clubs, the fights are now almost exclusively with very sophisticated guns.

Guess where they might come from? Amazing, isn’t it, that they cost less than fashioning a good spear?

In the most recent cases it appears the warring factions are better armed than the police.

Kenya has a strict firearm policy: it’s not easy as a private citizen to own a gun. But in the Samburu district of Kenya it’s hard to find a Samburu without a gun.

In an attempt to reduce the weaponry, Samburu authorities announced an amnesty several weeks ago for anyone who turned in an illegal firearm. That program expired Tuesday and “no firearms had been surrendered.”

It is, of course, a common argument promoted by arms manufacturers that peace prospers when more people have guns. This presumes that the vast majority of people are good and only use guns to defend themselves.

That argument is about as cogent as the idea that God created all cows for Samburu.