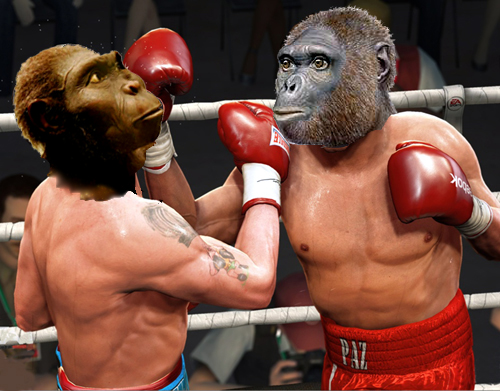 “And in Ring 3 the battle of the century!” Oh, sorry, of “the millennia!” Nope. “Of the Milli-Millennia!”

When scientists duke it out in public it’s either for prestige or money, and the two are usually inextricably tied together. This is particularly true of paleoanthropology which has little contemporary use; it’s not going to lead to a new food or power source.

So getting funds for the often expensive work that today includes super computers and treasured super MRIs is extremely competitive.

Frankly, I find it maudlin how similar this public war appears to the one duked out between Meave Leakey’s husband, Richard, and Tim White’s former boss, Donald Johanson, thirty-five years ago.

It’s made maudlin mostly by maudlin Tim White, who as he has grown in experience has shrunk in stature becoming nearly reclusive and guarding his science like buried treasure.

But Meave Leakey is not without the streak of vengeance that makes this such a soap opera.

Here’s the crux of the issue (which in my mind has long since been resolved in Meave’s favor):

Does the paleontological evidence we have today (the old bones of early man) point to a more linear or more branching form of evolution?

This makes me so weary. It’s sort of like asking, Is there really global warming?

Back in the 1980s the argument was more crisply viewed, I admit. And back then, with much less money available, it was as much a battle for survival as publicity.

Back then, Donald Johanson using mostly his great find, Lucy, pronounced that humankind evolved on a step-by-step, clear timeline, from one old type of man to another, to ourselves, and that every bone ever found was one of our ancestors. Line.

Richard Leakey in a characteristic chortling and antagonistic reply, necessarily using several of his finds said Johanson was crazy, that multiple kinds of early men lived simultaneously and that they were so different they couldn’t interbreed:

I.E., all the bones of early man represented multiple, maybe dozens, maybe hundreds of different creatures all “trying” to evolve into humankind and the vast majority dying out. Branch.

Today the argument doesn’t have quite the religious implications that existed in the 1980s when there was so much less fossil evidence.

White is not arguing that branching didn’t occur. But he is claiming to have drawn the line through existing fossil evidence from the earliest ancestor to us, and the key link is of course one of his finds, Ardi.

Meave Leakey, on the other hand, says that’s balderdash, that the existing fossil evidence is just by common sense such a scant portion of what actually existed, that it would be simply mathematically absurd to presume we have already found the links from the oldest to us.

Moreover, in a paper published last month in Nature, she claimed that a find she made nearly more than a decade ago is an old man that lived simultaneously with White’s Ardi but was so different it couldn’t interbreed even though it appears more “human” than White’s!

White immediately claimed Leakey’s analysis was flawed because it’s in such bad condition, and that her old man was actually the same species as his.

This is why Vanity Fair first published the definitive background to the early paleontologists rather than Science Today.

White is wrong, but Leakey’s current attempt to show him so is way too presumptive.

It’s a shame, because these are two remarkable scientists. This year Leakey became the first woman and first Kenyan to be voted into the National Academy of Sciences. White (also a member of the Academy) has a detail of field work that is mind-boggling: perhaps that’s why he never married or had a family.

But there’s neither enough fossil evidence or grant money for the two to share. And I’ll bet you three million years from now when their skulls are found, not even our future super wizards are going to be able to tell them apart.