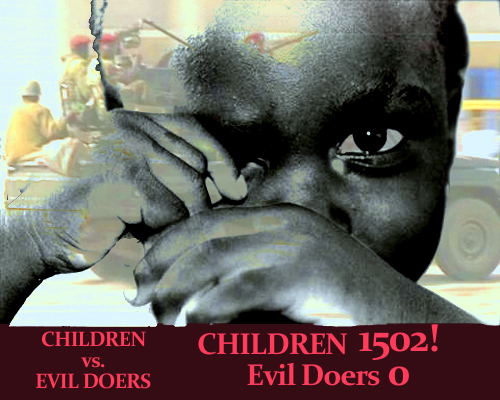 Sometimes good acts prevail even after evil-doers reverse them:

The previous Republican controlled Congress and current Trump administration wiped out Section 1502 of the Dodd-Frank Bill, the “Rule on Conflict Minerals.” But that rule had such a powerful effect when first passed by Congress that the world embraced it and has continued to strengthen it despite the official reversal by the United States.

Yesterday in Paris one of the most important conferences on earth capable of stopping the horrendous child labor and abuse by warlords in The Congo began. And the focus of the conference will be how to strengthen the heart and soul of Section 1502 which has now been repudiated by the United States.

Section 1502 — passed with the larger bill but never fully implemented and then mostly killed by Republicans — prohibits any company doing business in America from obtaining tantalum (more commonly known as “Coltan”) from entities engaged in terrorism.

“The Rule on Conflict Minerals” regulates Coltan, an essential element of mobile phones. The world’s principal users at that time (2011) were Apple, Microsoft, Samsung, Intel and Motorola, but virtually every IT manufacturer can’t exist without it.

Until Section 1502 was passed under Obama Coltan was mostly obtained from warlords in the troubled central African region of the eastern Congo. The warlords mined the Coltan using mostly drugged children, many under 10 years old.

The huge transfer of western wealth to this region is what allowed the warlords to flourish.

Rwanda was not anxious to implement Section 1502: I’m certain because the country’s elite were benefiting from the illegal trade. But when the main purchasers, the big multinationals, let Rwanda know that its previous methods of purchase were no longer acceptable, Rwanda changed its tune.

Literally within a year of the passage of Dodd-Frank, the warlord problem in the area started to dry up. The most horrible child abuse in the history of humankind came to an end.

Until Obama had problems with his second term Republican Congress in fully implementing Section 1502… Until the last Congress rescinded most of Dodd-Frank… Until Trump effectively denuded all of the bill that remained.

So with each little step backwards some few warlords reemerged, children were abused and killed again, but the “renewal” of evil never got full traction. The warlords are not wiped out, as they seemed to have been in 2013, but they are rare and there is some hopeful indication that the new DRC government might actually be able to control or get rid of them.

No child being slaved, abused and killed, should be tolerated, and the responsibility for those who are in the eastern Congo falls squarely on the Republicans and the users of that evil today. There are indications those users are newer companies from Asia. Consider that irony.

The big western companies got the message and conveyed it to the middlemen in Africa and have held onto the moral policy steadfastly. They have insisted ever from the day the bill was passed that their purchasing departments would no longer buy “conflict minerals.” Their policies didn’t change even as the Republicans did.

Even as the Republican weirdos tried to kiss-ass their paymasters, the paymasters refused!

Instead, the world has spent the last six years figuring out ways to strengthen the now wiped out Section 1502 of the now hardly existent Dodd-Frank Act. That’s what today’s conference in Paris is doing.

The current debate is how to improve and strengthen blockchaining technology, a concept that hardly existed before Dodd-Frank.

Even Rwanda, the bad boy operator, is now actively involved in improving blockchain methodology, because …

… multinationals won’t return to the old ways. They were outed by Obama and they aren’t about to test the patience of the world, again.

It couldn’t be better news. It means in a broad way that no matter how many evil-doers are out there, today – and boy, there are a lot – they won’t prevail. This story is proof.