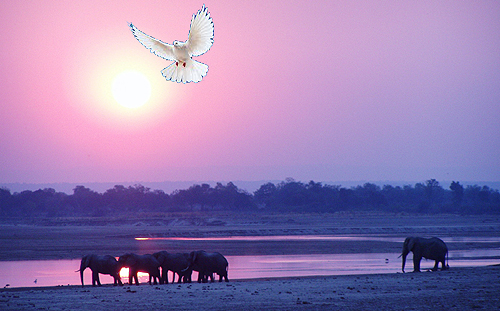 Conflict in Africa is declining, not only relative to the rest of the world, but historically within the continent itself, and a brilliant University of Wisconsin professor has discovered why.

The truth is counterintuitive to many Americans whose understanding of Africa comes mostly from the nightly news and America’s very distorted and political travel advisories. But Scott Straus has documented the fact, and what’s more critical, explained it.

The University of Wisconsin at Madison is fast developing as one of America’s invaluable resources for everything African. Strauss is young, an associate professor brilliant enough to obtain an endowed chair, concentrating in political science and global issues.

But Madison is rife with many others Africa directed, including one of my favorite, John Hawks, whose exciting blog is one of the most important first sources of breakthrough anthropology and paleontology in Africa.

So it is not surprising that research news about Africa comes from UW-Madison. It is surprising, though, that a young associate professor will dare take on contemporary media alliances as normally disparate as Ted Koppel and Richard Engel.

Koppel suggested on Meet the Press last Sunday that Africa is going nuclear, not necessarily figuratively, and far outpacing the danger of conflicts of the past. Engel suggested on Tuesday’s Nightly News that Africa exceeds Syria or North Korea in terms of potential conflict.

And these represent the liberal media! As far as Fox News is concerned, the only indication at all that evolution might be true is that Africa hasn’t yet.

Media news in short sound bites is how most of America forms its understanding. As Straus explained in an article Monday it takes more than sound bites to reveal the truth.

Straus’ quest to disseminate the truth has been a two-year one. Using the most incontestable data since 1960, he has demonstrated in publications and conferences that conflict in Africa is on the decline. It’s a particularly difficult task right now, and he refers to the northern African conflicts as an “uptick” but when laid into any graph of any length – even just 3 or 4 years – his premise stands.

And as I’ve written recently, many of us do not see this current conflict in northern Africa as lasting very long. (So I hasten to add that doesn’t mean terrorism will be wiped out, or that Egypt won’t boil and bubble for years to come.) But it does mean that from a truly global perspective, it’s wholly rational that the world’s biggest businesses are investing hands over fists in Africa, because even they know: Africa is the place to be in the future.

But even more interesting is Straus’ more delicate conclusions as to why.

Why is there more conflict in Asia, for example, than Africa? Why are wars – when they do happen – more gruesome and often barbaric in the Balkans than Central Africa? Why is North Korea or Iran so much greater a threat than an extremist Islamic Arab Africa?

1. The End of the Cold War
As I’ve often written Africa was the great pawn in the Cold War. It led to its current stubborn levels of corruption, since the patrons in the East and West lavished immature African societies with tons of money and weapons without requiring accountability. When the Cold War ended, this unfiltered pipeline did as well.

2. Democracy
This is Straus’ weakest point, but if I understand it correctly, he believes that before the advent of multi-party politics, dictators’ control of African countries’ growth, revenue streams and disbursements, were highly targeted ethnically or even just into the coffers of those dictators. The release of the economies of African societies requiring real public stewardship – coincidentally or otherwise with the advent of multi-party democracy – leads to a strong motivation to keep the social peace.

3. China
Like me Straus doesn’t hold China up as a model for how a big power should mentor small ones, but like me he realizes that China’s unique form of foreign policy is good for African peace. “China doesn’t take sides,” Straus says flatly. China takes oil. And it will do anything it can to get it. There’s no deceit, here. Everyone knows the rules of the game, and to be a winner, you have to have peace.

4. Regional Conflict Resolution
I disagree with Straus on this, but fortunately I think the previous three reasons are sufficient enough. Straus argues that regional powers and organizations have been working successfully to reduce conflict: South Africa in Zimbabwe, Kenya in The Sudan and Somalia, Egypt with the Palestinians, the African Union in many places. I don’t. I think these ostensible activities are totally emasculated without big power – mostly western – support and guidance. The signs are hopeful and this may herald the resolution centers of the future, but right now they are still the puppets in the shadow box.

But his last explanation could be stretched into an argument that is equally positive: that the Big Powers are doing better in shepherding conflict resolution in Africa. And with that I totally agree, and especially recently under Obama.

Truth is often so broad and so immutable that it fades like a watermark under the moments of things more exciting and threatening. That’s what much of Africa’s steady progress into the future is like. There was so little interest at all in Africa a generation ago by westerners, all we learned was the bad stuff.

That’s the history we store, miserably inadequate to produce sufficient contrast as a watermark on the abduction of child soldiers and Rwandan genocide. But the persistent and careful work by people like Straus will prevail, and I for one hope he continues to enthusiastically duke it out with the Koppels of the world.