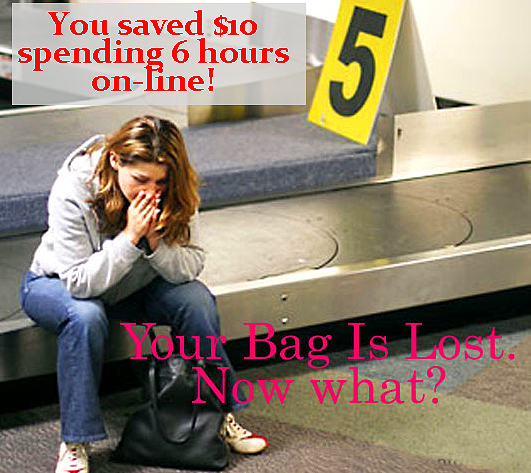 You can no longer buy a ticket on American Airlines through Expedia or Orbitz. Said another way: the big guys are fighting for your money and it doesn’t matter a hoot.

American Airlines is the U.S.’ second largest airline and the world’s third. After the completed merger of United and Continental later this year, it will drop another notch. Don’t lose any sleep over this.

Expedia and Orbitz currently account for about a quarter of all airline bookings made by U.S. travelers. After American’s move this week, that could drop at least temporarily by about half.

And what will happen to your air fares?

And what would have happened to your air fares if all of this hadn’t happened?

And what will happen if they resolve this, as they certainly will?

Fares will go up.

And how much more or less will fares have gone up depending upon when its resolved or not?

The high and mighty morality with which both sides in this Big Guy Fight have evoked is disgusting. Both sides, of course, claim that consumers are the losers and because of the other side. That they are championing competition. This is such balderdash.

Americans (not the airline, but the organic ones) are basically idiots when it comes to buying their airline tickets. They are suckers of the highest standard. Duped by hidden fees and outright fraudulent advertising, they will spend hours on their computer to glean $10 off a $150 fare.

That is not competition in action, it is obsessive-compulsive behavior.

And the winners in this insanity are the airlines and brokers like Expedia who realized that paranoid-driven consumers could be duped by internet games. American spokesman Ryan Mikolasik told the New York Daily News that the impoverished multinational is losing “several hundred million dollars a year” in fees paid online services like Expedia.

That is SEVERAL HUNDRED MILLION DOLLARS more than flying is worth. But don’t think that if American is successful, that you’re going to get a refund!

American Airlines alone is projected to earn over $400 million. That’s AFTER on-line fees.

Before this tiff Expedia controlled nearly a quarter of the ticket purchase market in the United States. That does not foster competition. Whenever any entity controls that large a segment of such a vital commercial market, competition is stymied not enhanced.

Capitalist principles in the purchase of airline seats were doomed when Jimmy Carter started the process of airline deregulation in the 1980s. That was the mistake that American society made, removing government oversight from a vital service so essential for every day life.

So it’s now chaos, with the Big Guys fighting over who is going to be able to screw us the most. And by the way, it can also flip over and screw the airlines and their employees royally, too. As happened with all the airline bankruptcies.

And I hesitate to point out that more and more mechanical problems are happening, because government oversight in that critical area is also wanting.

So don’t choose sides on this one, dear consumer. It won’t matter a hoot. And for god’s sake, don’t waste your time finding a ten percent deal from New York to Chicago by flying via Houston. You’re killing yourself, shortening your vacation, wasting your resources and foolishly increasing the number of miles flown.

It boils my blood, which I wish they were capable of doing with coffee on short-haul flights, which as you know, they don’t even do that, anymore.