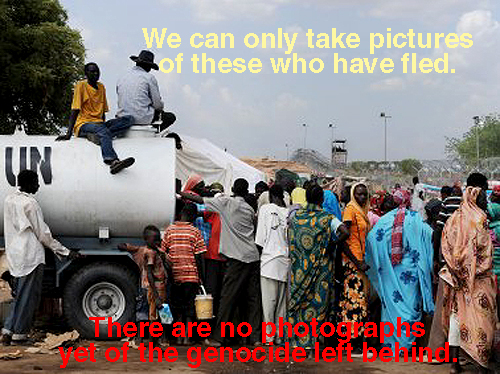 Even as muscled optimism sweeps across Africa and the MiddleEast, I worry that dark history is repeating itself, that the 1994 world-ignored genocide in Rwanda is occurring right now – this very moment – in The Sudan.

The racist North Sudanese government has started a military ethnic cleansing of Nubian peoples in the North Sudan province of Kordofan. The scale is terrifying. And I don’t think any country in the world will stop it.

The North Sudanese are cleverly mining the world’s troubled situations to pursue their evil. Modern aerial bombardment of Nubian huts, modern weapon assassinations even of traditional unarmed women and children, has all the markings of a well-thought out plan of genocide.

Monday the New York Times characterized the fighting as a “rampage” but the way the Times has issued the reports has confused readers and I fear diluted Jeffrey Gettleman’s fantastic reporting.

Mostly by its headlines, but also by the way it has lined its stories on the web, The Times seems to have confused the fighting in North Sudan with the upcoming independence of South Sudan on July 9.

We should all be effected by the genocide now going on, and none more than the new neighbor country to The South, South Sudan. But the way The Times has streamed the story, one could believe that the south’s Independence in two weeks is in direct jeopardy. It isn’t.

The situation in South Sudan actually improved Monday, while the genocide in the North just revved up. Clearly it is the intention of the evil North Sudanese government to take advantage of this confusion.

Monday, fighting between North and South Sudan forces and their supporting militias finally came to an end with a US-UN brokered ceasefire that will bring 4000 UN peacekeepers into Abyei.

Abyei is literally the spot on the map where huge portions of Sudanese oil comes from, and its sovereignty remains unresolved. It isn’t “on the border” between the two countries, “it is the border,” and both sides claim it. 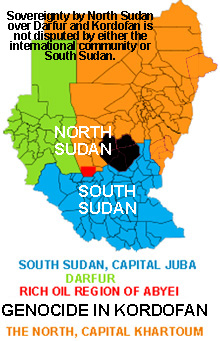 For the time being, the South while not conceding Abyei has more or less retreated from the heavier presence of military and other North Sudanese officials, there. This is wise, or independence on July 9 really could be jeopardized.

But the South’s de facto concession to the North does not conform with the majority of the residents of Abyei or the workers in the oil fields, there, and it will most certainly return as an area of contention again and again. Once UN peacekeepers arrive this week oil production in Abyei could start up, again, and a prolonged status quo would favor the North’s claim to sovereignty there.

But southern officials recognize any movement whatever of the elephant in the china cabinet could wreck entirely their plans for independence in several weeks.

So for the time being, this conflict has ended. It has not gone away. But South Sudan will become independent on July 9 with a host of problems, but none that include fighting right now with The North.

But even as Abyei settles down if only temporarily, the North Sudan government began a bold if blazoned all-out genocidal war in Kordofan just to the north and east of Abyei, Monday. This is what the Times has been reporting so well, but with headlines and web streaming that confuse it with the South’s upcoming independence.

This conflict in Kordofan has all the markings of a Darfur and could even be worse. It might rival the world’s greatest failing of the last several decades, the unstopped genocide in Rwanda in 1994.

UN press reports estimate that refugees from South Kordofan’s capital Kadugli number 40,000, but the World Council of Churches reported that the number is actually 300,000.

These represent people who have successfully fled the massacre. Do your own math regarding those who didn’t.

The North Sudanese Army has prevented aid workers from reentering the area and has announced that it will shoot down U.N. helicopters that previously had been given permission to bring in humanitarian assistance.

Like President Clinton’s retreat from Blackhawk Down, which led to his timid and delayed entry into Bosnia and his totally abandoning Rwanda in 1994, President Obama is withdrawing forces from Afghanistan to appease a war weary world.

Protests from Syria to Libya seem to be losing steam as conflict presses so heavily on the world.

It is just the time The Joker has been waiting for.