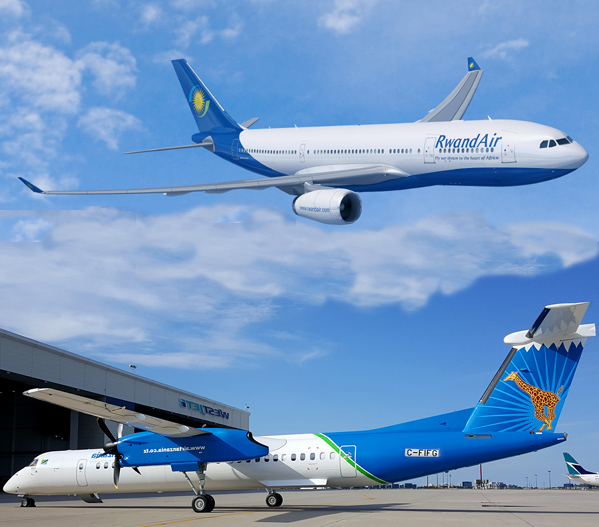 Every country wants an airline, its own airline, and how that airline works characterizes the country as a whole.

In a month Rwandair begins flying a new modern Airbus 330, the ninth modern aircraft in its fleet. Today, the third iteration of Air Tanzania begins as the first of two new turbo prop aircraft are delivered from Canada. I wouldn’t rush to buy tickets on either airline. Here’s why:

The cost of starting up an airline is extraordinary, even a small one. Tanzania announced it was paying $47 million dollars to lease – not own – the two 76-seater Bombadier Q400NG turbo props. The annual fees on that lease will amount to several million more annually, and of course the maintenance costs, salaries and marketing just to begin with create a spreadsheet that’s hard to print in black.

In America’s world $47 million dollars starts to sound like chip change, but not in Tanzania. A very successful, maturing modern airline serving a number of Tanzanian cities, FastJet’s standard fare from Tanzania’s largest city, Dar-es-Salaam, to its major international airport in the north, Kilimanjaro, is $40.

At that rate, if every single one of the 76 seats were sold for every one of the 365 days of the year, the gross revenue would be just over $1 million. Of course the aircraft can make a dozen runs a day if operated properly and not every seat will be discounted.

But however you run the numbers, the mathematical challenge is lost. FastJet is a product of Europe’s EasyJet and it’s been losing $20 million annually. The company’s shares have lost 70% of their initial value and the British CEO considered integral to its success announced he’s resigning.

The founders of EasyJet and Ryanair don’t give up easily. Both airlines have incredible ups and downs, and they might have decided to remain in the African market for the long-haul. But that is something that a financially strapped government has a harder time doing than a western business consortium.

Rwandair doesn’t share its financials because it’s held entirely by the government and its data is buried in the Rwandan government’s obscuration over anything monetary. Of all places, Wikipedia has the best info. Clearly the airline is losing a lot of money.

Tanzania’s economy is 7 times as big as Rwanda’s, but Rwandair will soon have a fleet of 10 modern aircraft easily 50 times more of an investment than Tanzania. This is because almost all business in Rwanda is underwritten by the big western nations still apologizing for their inability to have stopped the 1994 genocide.

Long-term investment in airlines is necessary and sometimes does payoff. Africa’s three major airlines, South African Airways, Kenya Airways and Ethiopian Airlines, are here to stay and beginning to function like the big guys, capable of taking huge losses for a few years only to reap huge rewards down the line.

Kenya Airways is the youngster and currently in terrible straights. But its enormous fleet and very respected European service has put it here to stay. Ethiopian has been around for the better part of a century, a product of the old TWA, and South African Airways flies nearly around the world from Sydney and Buenos Aires to New York.

It remains to be seen if FastJet will hold on, or if western investors rapidly building up Rwandair will succeed. But the proof is in the puddin’, and with less than a 60% favorable review from a dozen airline review sites online, that sounds like pretty wretched puddin’.

From a lack of promptness online to taking off, Rwandair is developing the same persona of the old Aeroflot.

I had the pleasure of flying Air Tanzania’s first inaugural flight from Dar-es-Salaam to Nairobi in 1983. The seat next to me was occupied by a goat. That’s true and totally unfair, of course, to suggest it will happen with next month’s third inaugural of the national airline.

Twice before Air Tanzania collapsed, leaving aircraft that littered the Kilimanjaro landscape for decades. It collapsed for the same reason that Rwandair would collapse — a losing business and bad service — were it not for Rwandair’s unique and hefty injections of western guilt capital.

It takes any airline a while to mature into the specialty of customer service, and the employees of Rwandair, like those I expect will be of the national airline Tanzania, feel entitled to their jobs rather than desperate to retain them as you find from an impressive FastJet, Kenya Airways or South African Airways’ flight attendant.

One thing is sure. The airline reflects the country that runs it, and unfortunately the civil service in Rwanda and Tanzania is not built of risk and reward and hard work, but presumption and entitlement.

I don’t expect Air Tanzania will survive very long. But stay tuned. I will be flying it.