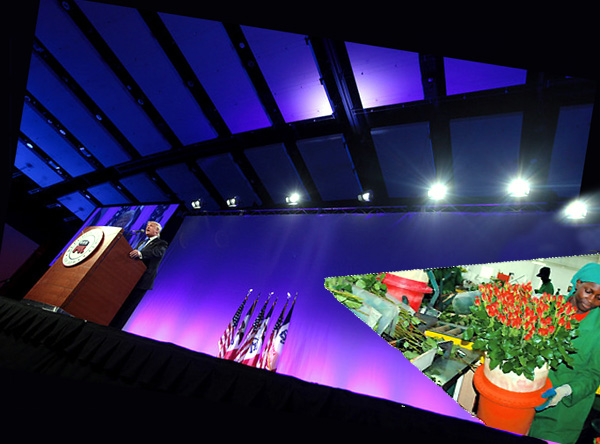 Africans are putting together the first drafts of policy to deal with Trump and while it reflects the sophistication and skill of today’s African leaders, the outlook is grim. The much loved former U.S. ambassador to Kenya, Johnnie Carson, wrote today, the best Africa can hope for is “benign neglect.”

Which is unlikely if Trump twists the globe and learns there’s a continent over there. The case in point is Kenya. I implied yesterday that Kenya’s unexpected extradition of two alleged drug kingpins to the U.S. was clearly courting favor. Sycophancy aside, the country is preparing for the worse.

Most Americans think of Kenya as wild and woolly Africa where you go to see big creatures. (It is, of course: Follow my blog starting Monday as I begin 6 weeks of safari!) When I started my career 40 years ago tourism was both the main source of the area’s foreign currency and its largest single GDP component.

That changed long ago. By a long shot, today, agricultural exports from Kenya are its main source of revenue and wealth: tea and flowers.

Kenya exports more tea than any other country in the world. (India produces more tea, but it consumes most of what it produces.) A close second is cut flowers. During the northern hemisphere’s winter it’s likely that a Rotterdam rose sold in Holland florist’s store came from Nanyuki, Kenya, and thanks in significant part to how America has helped Kenya.

Obama and previous presidents’ initiatives for business partnerships targeted aid to help emerging markets. Kenyans are keeping much of their analysis private, but reading the flowers and tea leaves it’s clear there’s panic:

Several days ago there was a spurt of hopeful reports that Trump’s termination of the TPP could be a boon to Kenya. But that was followed almost immediately with a downwards revision by Kenya’s CBO of the country’s current growth with a concern that Trump will realize that AGOA and TPP are in the same class of acronyms.

Today the country got specific:

The Central Bank’s governor in not so polite words told America that Trump’s protectionist policies could ruin Kenya’s economy.

He started by mentioning the 30,000 illegal Kenyans working in America. He claimed they contribute $1.7 billion to the Kenyan economy annually. (Read this from the link above, but the number is staggering and suggests that every illegal Kenyan in the U.S. remits $60,000 annually. I’m not ready to challenge this outright because I’m close with quite a few of these folks here and their loyalty to their homeland is extraordinary. But even if it were half or an eighth of this and what the governor meant was that their cash remittances led to this level of annual growth it is significant.)

Coupled with the governor’s second concern, that Trump will ignore-to-death or terminate AGOA outright, the Kenyan economy could collapse. AGOA is Africa’s TPP.

Last year Kenya exported nearly $½ billion in apparel to the U.S. under the free trade terms of AGOA. Negotiated by GW Bush and strengthened by Obama, it represents a fraction of the levels of trade embodied in the TPP, but it is ideologically and politically the same.

And its effect on the Kenyan economy would be much greater than terminating TPP would have with Japan or Korea.

Expect a “sharp dropoff” in Trump support for democracy and better governance in Africa. Concern for human rights will be sidelined. Exchange programs will be cut back. Shifts in U.S. policies on climate change will “have damaging ripple effects” across Africa. USAid will be slashed.

Trump is quickly becoming the angry rapid shrinking machine. He’s contracting America into itself, and because America both as consumer and humanitarian has been so instrumental in keeping the world afloat, a Trumpian whim could be the planet’s black hole.