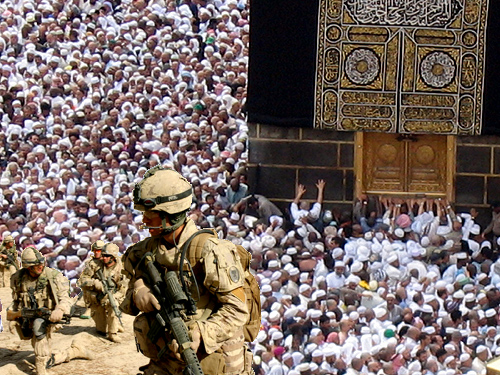 Like father, like son: Kenya has now joined its military father, the U.S., using illegal force in failed attempts to fight terrorism.

The Senate committee report released Tuesday is a shame on America that will follow our empire to its ultimate grave, but the extra-judicial killings of 500 detainees by Kenyan security forces is simply mindless.

My novel, Chasm Gorge, explains how a terrorist in Kenya succeeds by provoking America to react with excessive force. That’s exactly what’s happening in Kenya today.

And it’s fair to conclude that because America did it, Kenya does now. America planned, financed and helped managed the Kenyan invasion of Somalia.

The Kenyans are simply doing what their teachers did: Actions speak louder than words.

Yet there are words, too:

The Kenyan operatives told London’s Guardian that “they have received training and intelligence from Britain.” So add Britain to this terrible mix.

Why is this happening? Why did America torture? The evidence is strong that torture doesn’t produce useful intelligence, and even if it did it would be immoral.

Hypothetical cases suggesting that torture could reveal and thereby prevent an ultimate apocalyptic attack are ludicrous. Nothing yet in the human arsenal is more apocalyptic than the immorality of torture.

In today’s world and any future hi-tech world I can imagine, torture does nothing but escalate a conflict. So why pursue such inane policies?

The answer is the same as to why the Kenyans murder their detainees.

Revenge. It’s that simple. Revenge is short-term relief. It’s old testament equalizing. There is, in fact, some logic to revenge if a conflict is considered irresolvable, when compromise at any point is impossible. In this case only one side wins, and revenge is a move on the chess board that allows no draws.

If we truly believe certain conflicts are irresolvable, then as righties for years have argued, pull out all the stops! Let the nukes fall!

Fortunately, we’ve retain enough sanity to avoid doing this yet, which reveals the deeper truth that we are prepared to compromise, but that flies in the logic of revenge.

That’s the devilish duality of the American psyche: whatever our education and intellect tells us battles with our machismo. Our ego is deadly.

Many Americans are beginning to realize this. Terrorism wins when the terrorized over-react in fear, essentially defeating themselves.

We, and now Kenya, are doing exactly what the terrorists want us to do.

And so, we’re both losing. For gods’ sakes, Kenya, learn from your failed teacher.