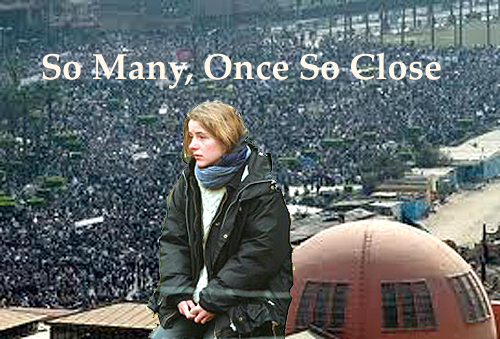 What the fizzled Egyptian revolution tells us is that the power of the people rises not so much for freedom as for bread. And who am I but a fat and comfortable American to think there’s anything wrong with that?

Today’s demonstrations are pitiful by last week’s standards. It’s also more rigidly organized, capable of orchestrated violence. It’s a quickly maturing opposition that lost Round One. Round One’s heart and soul was people power; that’s gone. Next moves – if they exist at all – must be contemplated without people power.

People power has retreated to homes and businesses. Many workers want to start spending the 15% pay rises announced over the weekend by the Egyptian government. The more effete have the promises of political reform to solace them at night. “Free” is an adjective being attached to everything from the continuing protest to Hare Krishna dancing.

We know different, of course: our media celebrities are now confined to describing their confinements: the press has been muzzled as never before. There’s internet, again. There’s even the Google executive let out of jail. Yet Egypt progressives write feverishly of a crackdown of dissidents in serious high gear, now directed by the so-called people friendly army not police.

My style carries gloom, but also guilt. I fret about which is more important: the crackdown, the disheartened revolution, the recovery of most power by Mubarak with the same indecision about which kind bagel I should pull from my well-stocked pantry to toast.

Mubarak can’t afford 15% pay rises to a huge section of his population with pipe lines being blown up, tourists fleeing the country and capital evaporating. But don’t forget sugar daddy sitting just to the southeast. I suspect some remarkable new alliances between Egypt and Saudia Arabia are being worked out right now.

If sugar daddy runs out of sugar, that’s another story altogether. Bread digests quickly. If there’s not more in the days ahead, people power will rise, again.

But it always seems to work.