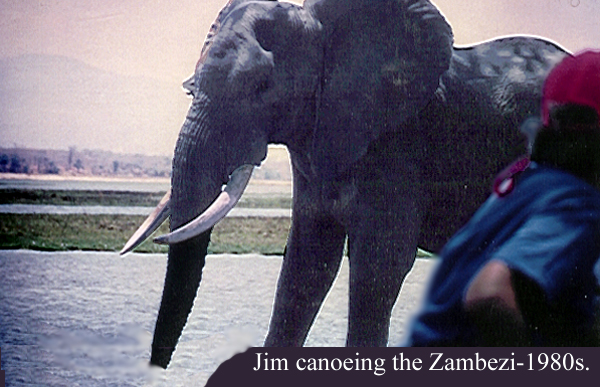 A Florida woman canoeing down the Zambezi nearly lost her leg after being attacked by a hippo and undergoing hours of surgery in Johannesburg earlier this week.

Kristen and Ryan Yaldor were celebrating Kristen’s 37th birthday on one of my most favorite trips when I was younger. The guide noticed something unusual to the right, told the couple to paddle to the left, and moments later Kristen was in the mouth of an angry mother hippo.

Kristen herself has not yet commented on the incident, but her proactive, South African mother in Florida has been highly critical of the trip operator, Wild Horizons.

Martine Yaldor’s rants are unfair and completely unsubstantiated. This is an extreme sport. You don’t go canoeing down the Zambezi without assuming this although rare very real risk.

There are no good statistics for overall hippo attacks or animal attacks on Zambezi river trips. Anecdotally I’d presume no more or less than bear attacks in American national parks.

I can’t tell for certain which itinerary Kristen and Ryan were on, but the standard trip is a 3-day, 2-night camping/canoeing trip that starts east of Kariba, far east of Victoria Falls.

The trip I so loved was 42-47 kilometers long, the length determined by the ever changing strong river and where we could find appropriate sand islands for overnight camping.

We used 18-foot sturdy Canadian aluminum canoes, packed all the gear in the center and put the clients in the front and back. No unusual canoeing expertise. The Zambezi is a very fast-moving river. Paddles are for steering and stopping.

Hippo events could happen at any time, but my heart really started racing whenever we approached several of the famous “Hippo Cities:” These were places where unusually large numbers of hippos (sometimes over 50) congregated in deeper river pools just before the river grew unusually shallow.

From time to time the strong river currents collect tons of lose, smaller river rocks and build them into these “table top” areas. The river swirls deeper just in front of them then spreads over them like butter on a skillet. We often had to portage at these points pretty close to the river horse beasts.

I always felt the greatest risk wasn’t the animals but the current. Dead trees often fell into the river and got lodged in the bed. Only a twig popped above the water line. If your fast moving canoe hit that “tip of the iceberg” – as mine did a couple times – your boat flipped.

Once in the river we had to remain completely still and let the current naturally drag us to the shore lest our movements attract crocs.

If any old clients still alive remember the incident, I’d love the pictures I know you took of me standing drenched on the shore with an elephant gun draped over each shoulder!

Our three canoes had crashed into a dam of fallen mopane trees. When mine began to flip I grabbed the guns proffering our food and gear to Poboko. Poboko was the moniker we gave the God of Hippos (combination of Poseidon and the Swahili name for hippo, mboko.) It worked. Poboko had us back on the river the next morning!

By the way, I’ve never shot a gun in Africa and this was the only African safari where one accompanied me.

There’s a lot more danger than hippos and crocs. See the picture heading this blog. That’s me about 20′ from an ele. Some of the greatest dangers were at night when we couldn’t find a sand island and had to camp on shore.

Leaving your tent unzipped is a party invitation to hyaena. I remember once arriving at just such a campsite as a medivac helicopter was taking off with a Brit whose face had been bitten off by a hyaena as he slept in the open.

I’m pretty sure that most guides will agree with me that the animal with the most tourist attacks in its portfolio is the buffalo. Tourists wandering unguided into the bush are regularly attacked by these awesome, giant collections of ancient muscle who despite their 2 ton+ size are as quiet as a flea when sitting behind a bush chewing their cud.

EWT stopped brokering Zambezi canoeing trips when the political situation in Zimbabwe got so bad in the 2000s. So many refugees were fleeing the northern part of the country, swimming over the Zambezi to exile in Zambia, that the animals freaked.

I actually believe even the brainless croc geared up. Many refugees were taken down, but crocs began to attack tourists in boats, too: A teenager in Seattle was actually pulled from a boat by one.

Although the Zim political situation is far from stable, the refugee wave is long over. But I’ve had no personal experience for more than 20 years. Were I going to consider this most wondrous and exciting trip, I’d spend some time interviewing a number of local operators. They are not, like Martine Yaldor so maliciously claims, irresponsible.

You must take the responsibility that this is not a normal game viewing safari. There’s nothing I can discern that a good guide could have done to have prevented the hippo attack on Kristen Yaldor. It was a risk she gambled and lost. I hope she won’t regret it.