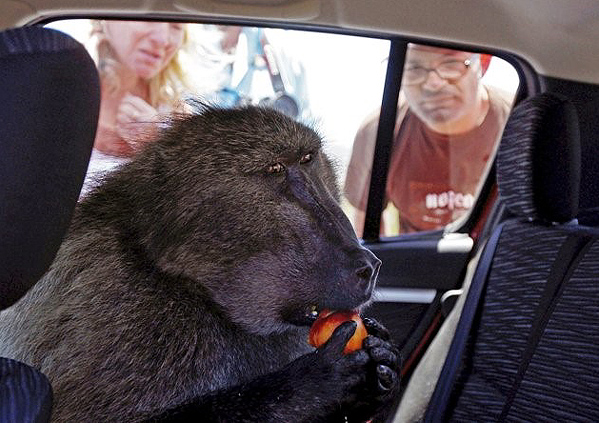 At the end of six days in two different big game reserves in South Africa each of my two separate groups was beaming. They’d seen leopards, lions, wild dogs, black and white rhino, elephant, honey badger, multiple kinds of antelope … it was a dream come true! They’d seen everything in the wild!

All of us exaggerate our vacations. I don’t think I’ve ever asked someone, “How was that trip, eh?” and got a reply something like, “Oh, OK.” It’s either a “once-in-a-lifetime” pure luck treasure that exceeded all expectations because of some moment of luck or insight … or a complete disaster.

We refuse to consider our leisure time unremarkable. We either blow away our own tiny minds with the masterful planning that had failed us rebuilding the kitchen, or we are scammed and deceived, cheated in the most ungodly of ways.

Africa is a huge a place. Sub-Saharan Africa – where most of the wild animals are – is almost as large as North America. How could it possibly be that a “wildlife experience” in the Yukon is the same as in Orlando?

And yet that’s what returning travelers lead us to believe. It’s not entirely their fault. They’re encouraged by intentionally deceptive marketing. Disney insists that the Animal Kingdom is everything you need to know about free-ranging fur and teeth.

Essential Stop Note: I design and lead trips to South Africa for much, much more than wild animals. The country is one of the most fascinating, dynamic and dramatic in the world: its culture, booming cities and deep history match almost any other destination in the world.

But I know that without “big game” it would be much harder to lure people to South Africa. Years ago my wife regularly guided a trip we called, “The Cultural Mosaic of South Africa” but over the long haul it’s only been trips that had more game viewing that survived.

And that’s fine, if you don’t fool yourself.

South Africa’s Kruger National Park is among the finest national parks on earth. It’s large enough (6,000 sq. miles) for its more remote parts to remain truly wild. But these areas don’t have the facilities that attract foreign visitors.

Almost a third of the land of Kenya and Tanzania is either very loosely managed national parks or completely unmanaged wild land. That’s roughly 200,000 sq. miles, at least a hundred times more truly wild land than in South Africa. This is where the foreign visitor comes.

But more to the point: South Africa’s “game parks” are tightly managed just like America’s own national parks. This is done not for foreign tourists but for South African citizens who flock to Kruger just like we go to Yellowstone.

So – just like Yellowstone – the roads are paved, there are RV hookups and well cut trails led by rangers, park centers replete with restaurants, interpretive centers and rental car facilities. On weekends and school holidays it gets crowded.

For the exclusive foreigner with a bigger budget – just as with the dude ranches and farm spas that surround America’s national parks – you can visit a “private game reserve.”

A few are adjacent Kruger and there is no fence separating them. So the animals wander back and forth, and the private reserves fashion experiences that seem “wilder:” No paved roads, restricted use just to those who pay handsomely, and always lavish accommodations and service. Kind of like Animal Kingdom.

The wild animals in these private reserves are the same as the wild animals in Kruger: they aren’t as wild as in East Africa because they’ve been protected and nurtured for generations. Their behaviors have changed.

How different are they? Well not enough that you should try petting one. But consider how different a bison in Yellowstone is from one in the far northern Yukon, or a wolf being watched by dozens of visitors in Glacier compared to the wolves that run wild in Denali.

I find them very much different but that doesn’t mean they’re less dangerous: in fact, it could be the reverse! Partly tamed animals are often the most dangerous of all. They’re more used to people. A bully dog swaggering through a park often takes more risks, too.

Kruger and the country’s few other big game parks actually host fewer foreign visitors than the plethora of private game reserves. Except for the handful that actually adjoin Kruger these private reserves are completely artificial. The big game has been brought in usually from other private reserves. In these reserves animal territories, breeding cycles and all general behaviors are dramatically altered. They really are no longer wild.

Finally “wild” usually means “more.” Lots more. On my last two safaris in South Africa I counted 29 wildebeest over 6 days. I usually stop counting around a quarter million in the Serengeti often on the first day.

“More Wild” is what I like, but it may not be what Planet Earth likes. Eventually East Africa will become as developed as South Africa. The wild lands will shrink. Many scientists worry that East African authorities pay so little good attention to their wild lands that instead of being able to transform the Serengeti into an East African “Kruger” that it will simply crash and be replaced hoof-stock-and-barrel by a mall.

Kruger stands as the model. It’s better than expected considering it’s a part of such a modern, dynamic country. But when your neighbor returns to tell you that she saw everything imaginable in the gruesome wilds of South Africa, give her a wink.