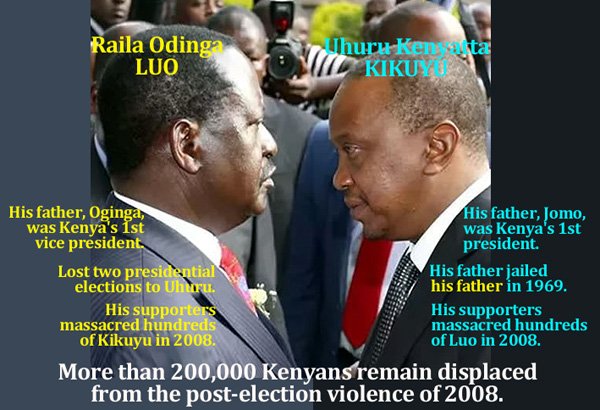 Democracy is alive and well in Kenya! Violence has already begun. Tear gas wafts through the city centers of Nairobi, Kisumu and Mombasa, the three largest cities. The main opposition party has told supporters to clear off the streets because continued police brutality has so far killed 33 protestors.

All this portends serious death and destruction starting about a week from tomorrow and continuing as it did almost exactly a decade ago for several months before slowly and painfully settling into another chapter of nervous peace, the country then more scarred than ever. Why can’t this remarkably educated, progressively developed country get it right? Tribalism.

Just over a third of the country has vowed to boycott the election rerun scheduled for October 26, which if held as planned will trigger mayhem. Do the details, matter? Probably not, because the real problem is tribalism and nothing seems to be able to overcome that. But for the record, here are the details:

Since independence in 1963 Kenyan political parties have been defined by tribe. Of course all of premodern Africa was tribal but the century of European colonial rule reenforced it, except in South Africa where much of the country remained independent of colonial rule for long periods.

When independence loomed the colonial powers had lost all chances of creating idea-based republics out of societies they had spent nearly a hundred years ossifying into tribal groups.

So virtually all but one or two African leaders emerged at independence as chiefs of their tribe. In the ensuing years they simply continued the policy of their colonial masters, favoring themselves.

Immediately after Independence Kenya went through a revolutionary purge. The president, Jomo Kenyatta of the dominant Kikuyu tribe, jailed his principal adversary, Oginga Odinga from the Luo tribe, the second largest; and had his second adversary, Tom Mboya, also a Luo, shot in the head.

That was followed by a long period of benign government by Kenyatta, who while favoring his own tribe certainly did not wholly oppress the other tribes … just gave them less. And because Kenya was developing rapidly, thanks mostly to western aid lavished on the country for being anti-communist, there was a lot to go around. Even non-Kikuyu looking at their poorer neighbors in surrounding countries feared upsetting the apple cart.

That was the situation in the early 1980s when I was guiding a Bronx Zoo trip on a Kenya safari. We were driving to Kenya’s best game park, the Maasai Mara, through the tea highlands near Kericho. This is more or less the division between Kikuyu and Luo.

Although Jomo Kenyatta had been in power for 15 years, he had never visited Luoland. He didn’t dare before then.

When we turned a street in Kericho our 8 minibuses were suddenly in the very middle of a long line of limousines and other landrovers and sedan cars. I always rode in the front car and was following without hesitation an angry soldier’s gestures in the jeep just in front of us, my driver sweating and refusing to fully explain to me what was happening.

Soon we were in a procession through the center of Kericho town. You wouldn’t have thought it a celebratory procession, because there really weren’t very many people lining the streets, although there were enough school girls in white dresses waving Kenyan flags to make good photos.

What I realized all of a sudden was that my folks were standing up in the vehicles (through the safari bus’ poptop roofs) and waving to the Kenyans lining the streets who were then motivated to shout and applaud and exalt all sorts of contained happiness.

The procession, with us in the middle, proceeded outside the town and into the bush and continued up a small hill then stopped.

We had no idea why we had stopped. The soldier walked over to my driver and they exchanged something in Kikuyu which I didn’t understand. When the soldier left, my driver smiled widely and told me to look carefully at the top of the hill. President Jomo Kenyatta of Kenya got out of his limo and turned to the side of the road, unzipped his pants and took a piss.

His procession then raced north to Nairobi and we continued south to the Mara. Kenyatta shortly thereafter was named President for Life by the Kenyan parliament. Reagan applauded the move.

When Kenyatta died he was succeeded by his vice president, a man chosen from an itsy bitsy tribe in order not to upset anyone. But the dictatorial reins were in place and Daniel arap Moi slithered into them perfectly. By continuing to favor the Kikuyus, Moi managed to stay in power for 17 years.

By this time America and the West were repenting their Cold War guilt trips. Democracy was the all the thing. Moi managed to become elected in the first seemingly democratic election Kenya had ever had in its 35 years, mainly by cheating and manipulating the process and even fooling the Americans.

But the second time round he was easily defeated. That time, 2002, Mwai Kibaki, a Kikuyu won. He defeated the next most popular person, Raila Odinga, a Luo, son of the first vice president who the first president jailed.

In 2007 things heated up terribly. What’s so astounding about all of this, is that the election process in Kenya got fairer and fairer. But because everyone is so tribal, that simply further cemented tribal differences.

Meanwhile, of course, kids who hadn’t even been born during the first Kenyatta regime were now educated and voting. They started if ever so slightly to deviate from tribal allegiances. The underdog, the second largest tribe, the Luo, adopted a progressive, left-leaning agenda. The Kikuyu, who prospered during all the duplicitous politics of the Cold War, stayed conservative, right-leaning.

The 2007 election was truly too close to call. Horrible widespread violence broke out. Western powers and Mandela and the Pope and everyone else got involved, and finally a peace agreement was struck – between the Kikuyu and Luo – that heralded a rather promising period of joint government that created a masterful constitution and a burgeoning economy.

(It’s expected, by the way, this is exactly what the current opposition leader will call for instead of elections when he makes his critical announcement, Friday.)

With a new constitution in hand, what shining new politician arrives on the scene? Uhuru Kenyatta, the son of the first president.

Kenyatta battled Odinga for the 2012 election. It was fair and free. Democracy was in tact and the masterful constitution brought it to fruition. It was, again, an incredibly close election and the outcome was finally decided three months after the vote by the Supreme Court. Odinga stepped aside grumbling, waiting for his next chance.

Kenya prospered in the years 2012 – 2016, really well. I could never have predicted the highways, railways, airports, malls, tech cities and so much more.

But Kenyatta feathered the beds of the Kikuyu just like his father had done. Odinga’s popularity grew, even among many Kikuyu – especially the younger – who were fed up with tribalism.

The election on August 7 was totally and completely free and fair. I was there. It was terrifying but it was exhilarating. And using the masterful constitution Odinga challenged technical aspects of the tallying of votes that the court could not ignore. The election was voided by the Supreme Court. A new election was scheduled. A week from Thursday, now.

But even the old dog opposition candidate from the second biggest tribe, Odinga Oginga, knew that he had lost freely and fairly. And so even if the country fixes the technical irregularities, he will lose, again. Tribalism reigns.