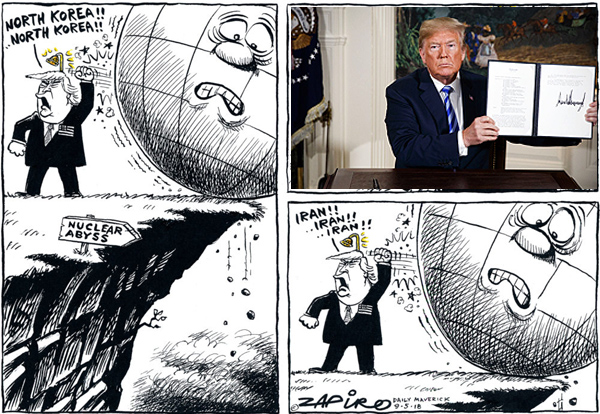 Fear, uncertainty and a growing distrust of America spread across sub-Saharan Africa last night as it grew more and more evident how crippled a number of African countries might become as a result of Trump’s decision to pull out of the Iran Nuclear Dear.

The simple business model Iran employed with many African countries with cheaply priced oil was to develop additional trade and it worked.

Moments before Trump’s announcement yesterday, the Iranian ambassador to South Africa said that he hoped the U.S. withdrawal from the agreement “would not affect the relationship between South Africa and Iran.”

But everyone knows otherwise.

America has not yet structured the details of its withdrawal from the deal. So it’s unclear, really, what America withdrawing from the deal and all the other parties sticking to it, will mean.

Immediately “the decision is likely to raise the risk of conflict in the Middle East, upset America’s European allies and disrupt global oil supplies,” according to a Nedbank economist in Johannesburg yesterday.

But one South African commentator also warned that Trump might extend sanctions to all countries that continued to trade with Iran, a component of America’s earlier Iranian sanctions prior to the deal.

So not only would South Africa (1) be paying higher pricesfor oil; (2) lose the $8 billion dollar trade goal currently negotiated with Iran by 2025; but could also be stiffed directly by America.

No one is yet reminding us that South Africa voluntarily abandoned its own nuclear development a generation ago when it was far ahead of Iran. The two could easily develop a mutually useful relationship if both felt sided by America, now.

South African media, similar to media in other countries across the continent, also expressed the fear that Trump was now jeopardizing any possibility of a North Korean agreement.

A leading Kenyan commentator said the crux of the matter was that “Trump’s onerous demands and his warning that Iranians deserve better than their current ‘dictatorship’ will only heighten suspicions his ultimate goal is regime change.”

I don’t know for how much longer the world – indeed, Americans – can weather Trumpism erosion of civility and diplomacy. I really don’t know if it’s all going to come tumbling down in some horrible war, for example, or if we’re just going to stumble deeper and deeper into a dark tunnel of isolationism.

The latter is hardly comfort. Trumpism’s fuel is the ignorance thus fear of community, globalism and inter-connectivity. So his systematic destruction of it should come as no surprise.

The question is simply how long it will take.