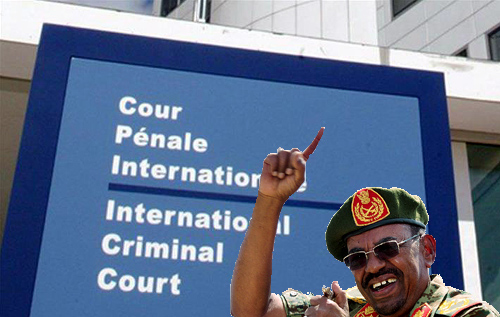 South Africa moved yesterday to begin withdrawing from the World Court (ICC), which would effectively destroy the institution.

Africans across the continent have been complaining for some time about The Court and serious threats to leave have come from such important countries as Kenya, Egypt and Nigeria.

If South Africa leaves it’s over and done.

I love the World Court and I’m in the American minority, again. All the European countries, Canada and almost all the African countries have signed on to The Court. Among the 70 or so countries that have refused to join The Court are the U.S., China and Israel.

To me the birth of The Court in 1998 was David conquering Goliath. For the first time in human history, there was an arbiter, a judge, with absolute power of law over the majority of countries in the world, including all of Europe.

Communists, capitalists, dictators, socialists, politicians and leaders of opposite stripes and convictions, they were all beholden to the court’s singularity: the only, and the ultimate adjudication of four grievous infractions of world order:

– crimes of genocide, crimes against humanity, war crimes and crimes of aggression.

Wow. Up yours Scalia.

It’s bound by the Security Council but has an irritating independence from it. It can develop prosecutions on its own, but so far prefers to “accept” cases transferred to it from sovereign nations or institutions like the UN.

Because the thresholds for evidence and of proof are so severe, far greater than in the United States or virtually any of its member states, the court has moved glacially, but it’s moved. It’s convicted perpetrators of the Rwandan genocide, of the Blood Diamonds Wars and it’s in the thralls of trials about who caused the horrible Kenyan violence of 2007.

Hm. No cases in South America? Nothing from Asia? Currently there are 23 “cases” grouped into 9 “situations” being investigated by the World Court. They are all in Africa.

The drumbeat of imminent collapse until today was that the Court is prejudiced, perhaps racist. But with South Africa’s move today, that changed however subtly:

“There is a subculture in global politics that say some are equal but not equal to others, a ‘holy cow’ culture in which the US and other human rights violators are untouchable yet African nations are subjected to the rule of these ‘holy cows’,” writes South African businessman Bo Mbindwane in support of his country’s move to withdraw.

This, now, is the newer theme African proponents are making to leave the Court. No longer is it that the Court is racist, but that the creators of The Court — the U.S. principal among them — have refused to join and are therefore immune to its powers.

Yet America can still – and has – through its power on the Security Council referred cases to The Court, even though America cannot be prosecuted by The Court.

To me this is a much more powerful argument than that The Court is racist. The reason that Africa is exclusive to ICC prosecutions is in part because so many African countries were courageous joining. Other human rights violators like Mynamar, Syria and Laos didn’t join.

And that’s a terrible weakness of The Court: it can only go after its own, and its own are not necessarily the worst offenders.

Nascent institutions like this – even without the wholesale endorsement of all the world’s powers – may prosper when the world has a single focus on challenges likes 9/11 or the Great Recession.

Remove these overriding global horrors and space is created for more political introspection, and I think that’s what’s happening, now. Albeit that The Levant is an abject mess, worldwide the stresses of imminent hunger and economic collapse — or world war — are absent for the first time in nearly a generation.

In this qualitative and relative calm of finally surviving, the grievances of inequalities grow clearer, whether that be inequality of income, gender or … World Court jurisdiction. It’s no longer a matter of just grasping to survive, but demanding to be equal.

It’s not a done deal, yet. The call to leave The Court has come from the ANC not the government of South Africa, but as you can tell I fear this time the drumbeat means war.