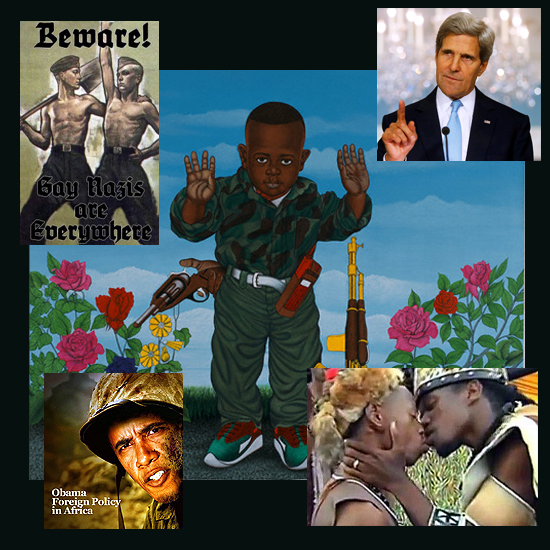 The U.S.’ complete disengagement from Uganda would seriously jeopardize its already faltering economy, ostensibly but not completely truthfully because we disapprove of the country’s new anti-gay laws.

Together with a variety of European countries that have already suspended aid, the expected U.S. cutoff would reduce the country’s GDP by more than the 2.7% languishing growth it’s currently struggling to achieve.

That will topple the country into recession.

Like Zimbabwe years ago Uganda would become dependent upon its neighbors. Zimbabwe has floated above complete annihilation for nearly two decades because of South African assistance.

Disengaging from Uganda now serves a lot more interests to the United States than just the aggressively stated ones by Secretary of State Kerry regarding human rights.

The U.S. had become somewhat mired in Uganda, starting with Bill Clinton’s forced love affair with the country in the 1990s as a manifestation of his mea culpa with regards to not acting to stop the Rwandan genocide of 1994.

Disproportionately large amounts of aid flowed into Uganda from Clinton’s U.S. Particularly in a country as poorly prepared for business as Uganda, that aid developed a dependency that has been hard to end.

Bush and company nefariously increased U.S. involvement by helping Uganda enact the very law that Museveni signed this week! Bush officials and many more subterranean lobbyists actually lived in Uganda for quite a while ostensibly teaching it “to become democratic.”

The main Ugandan leader of the bill in the legislature was trained by right-wing legislators in the U.S.

All of these cross favors anted up the aid.

Obama could have pulled back, but didn’t. Instead, he used Uganda as the portal to continue the interior chase of terrorists scattered from Somalia’s cleansing. Ugandans cheered the 90 special forces that landed near the capital and marched across the country on Uganda TV, chasing the terrorist Joseph Kony.

That cost a lot.

I ally myself with Norway. The unequivocal ending of its $8 million dollar in aid is a drop in the bucket compared to the U.S., but its morality goes unchallenged:

“Norway deeply regrets that Uganda’s president today signed a new and stricter law against homosexuality,” Norway’s foreign minister, Børge Brende, said Monday. “It will worsen the situation of an already vulnerable group, and criminalize individuals and organizations working for the rights of sexual minorities.”

In contrast, Kerry’s statement comparing Uganda to Nazi Germany has so much anger in it that you know there’s more to it.

And that’s a simple deduction: we want to pull back from mistakes of the past. Clinton’s mistake in Rwanda was compounded by throwing unaccountable aid to Uganda in restitution: that was wrong.

Bush’s involvement in helping Uganda to achieve this anti-gay rights legislation is the wrongest of the wrong.

And Obama’s militarism of Africa is the third wrong. Now that all these missions are accomplished, in typical American fashion, we now disown them.

When we do we’ll be on a more correct path. But it was a moral compromise at many of the junctures that got us to this point, and if you subscribe to Kerry characterizing Uganda as Nazi Germany, then you better characterize America up until now as a House of Chamberlain.