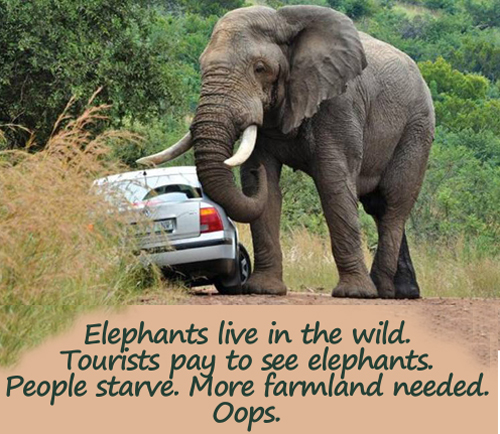 Hunting and culling are acceptable in certain cases to protect the lives and livelihoods of people. In Africa this is a complex and difficult topic.

In my series on hunting this week I argue that hunting is no longer a good conservation tool and that in most cases should be outlawed. But there are reasons beyond conservation that make hunting and culling reasonable in limited cases.

The obvious first one is to protect people and you may think it silly to even note this. But I do so to point out how easily the concept is abused.

In June a visitor near a trail head at the Denali Park headquarters shot and killed a moose that he claimed was charging his family. Although the Park Service decided it was a justified killing, it’s hard to imagine so.

Similarly and also because of Congress’ recent act to allow tourists to carry firearms into national parks, bears are now being killed.

Having been in Denali often, and often enjoyed the crowded visitors center, as well as a number of its well patrolled tracks, the authorities have a pretty good record at advising people how to remain out of harm’s way.

Until the Congressional law allowing firearms, it was not by shooting the animal that a tourist protected herself. Simply moving away from it has proved time and again the most effective defense. In fact there is every concern now that animals fired upon will grow increasingly aggressive.

So the specific cases in the foregoing represent abuse of an otherwise reasonable cause for killing an animal.

In Africa these human/animal conflicts are exponentially greater than here at home, and there are many more bigger and destructive animals.

It isn’t tourists being threatened in Africa, it’s farmers and school children. And as human population centers increase and necessarily compete with areas previously wild, these conflicts grow faster than even neutral policy makers are able to deal with.

There are no statistics in East Africa as kept by American parks or the State of Alaska. But everyone knows there are dozens of human/animal conflicts weekly just in the northern game area of Tanzania.

“The animals just cause problems. During the rainy season the lions and hyenas attack us all the time,” one Maasai farmer told London’s Guardian newspaper.

Because tourism, derived from these big animals now accounts for nearly 15% of Tanzania’s GDP, the acts of farmers to protect themselves, their livelihoods and families is technically illegal.

But in the same Guardian article, a Tanzanian field worker for one of the world’s most radical animal conservation organization, African People & Wildlife (APW), conceded “ “It’s not easy, there are lots of problems, but we must try to understand the villagers instead of just punishing them.”

So both Kenya and Tanzania have passed laws that compensate farmers and landholders who can document destruction by a wild animal. But documentation is difficult and corruption caps an absolute inability to effect this as workable policy.

APW is not yet up to my reasoning that given the lack of workable policy, villagers should be able to kill an animal that threatens them, but I think the mounting number of incidents in East Africa will ultimately make this policy.

Culling is a more delicate issue, and for years I felt it unnecessary, but now I don’t. It had been a standard practice throughout all of southern Africa until the mid 1990s when animal rights’ activists prevailed.

Culling was stopped throughout much of southern Africa when the most used and famous park, Kruger, banned culling in 1995. But then it was reinstated in 2008.

Arguments for culling are often flawed. Similar to those used to promote deer culling here at home, bad arguments are often proffered that extreme population densities of one species crowd out another.

Evidence of this doesn’t exist. I don’t subscribe to the notion of “invasive species” because there is no documented case of invasive species categorically pushing another species to extinction – not kudzu, not garlic mustard, not Asian carp or Japanese beetles … or any of the other similar species’ claims in Africa.

I see “invasive species” as the heroes of natural selection, and as best evidenced by the long-term results of the kudzu invasion, nothing bad really happens in the long-term. In fact, it’s usually a good outcome.

The initial invasion of kudzu produced visible declines in other plants, but after long-term studies many of those competing plants have returned, and researchers obsessed with the notion of “invasive species” had to result to chemical harms to the atmosphere, something much harder to refute but similarly much more oblique.

Many argue kudzu is now saving forests. After years of trying to insist kudzu was going to take over the world, southerners have come to grips with its advantages conceding the any destruction was insignificant.

See a documentary film produced at the University of Alabama.

An extreme theory of invasive species leads to the South African concept known as “Carrying Capacity” which claims to determine the most perfect balance among all species in an ecosystem, and then prunes and imports species to maintain this balance.

“Carrying Capacity” was the original reason used by Kruger park scientists to cull before giving in to to animal rights activists in 1995.

But it was something quite different that tipped the scales and allowed them to reverse their decision 13 years later. The compelling argument became “human-elephant conflict” according to parks’ studies.

To be fair, Kruger and South Africans still embrace “Carrying Capacity” which is, of course, allied to notions of controlling invasive species. Both arguments might be useful when managing a defined area natural wilderness. But neither is compelling when applied to larger areas or the wild as a whole at which point it becomes as destructive as the impetus for considering it.

Human/animal conflicts, though, are compelling enough. That’s when hunting and culling are justified.

Thursday, I’ll examine why sports hunting is no longer a viable conservation tool in Africa or here at home.