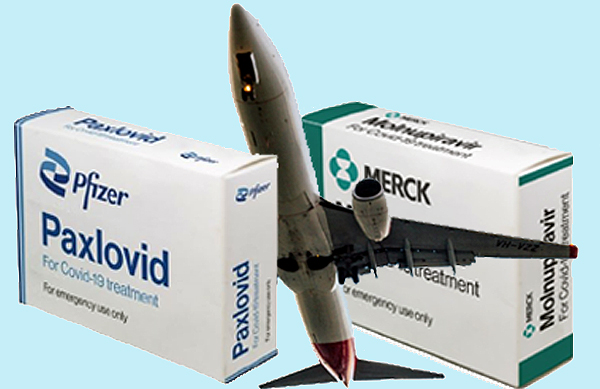 I’ve scheduled EWT’s first public safari that I’ll guide for June! I think that’s the first moment that international travel to Africa will be manageable.

France destroyed then returned the Merck anti-viral that it received over the weekend, which the FDA approved several days ago. The Merck pill, molnupiravir, reduces serious disease and hospitalization by 30%. But with news of the Pfizer pill, Paxlovid, which reduces serious disease and hospitalization by nearly 90%, France ain’t hav’n nothing of the cheap stuff.

Merck has already manufactured millions of molnupiravir, but Pfizer says it won’t have substantial numbers of its pills before the end of January, beginning of February.

How does this effect travel?

We saw with this morning’s announcement from the State Department that restrictions on eight southern African countries will soon be relaxed. That’s the first of many things you’re going to see happening, one after the other, in the next few months.

First, let me explain that none of this will significantly mitigate the state of virus in distant destinations like Africa for a very long time. WHO doesn’t believe most of the world, including places like Tanzania, will be sufficiently vaccinated before the end of 2023.

Antiviral pills – particularly Paxlovid – are no easier to produce than a vaccine. It’s much easier to package and ship, but its actual production is quite complicated.

So we should expect that WHO’s estimate of when these pills are available in sufficient enough numbers to distant parts of world is likely more distant than for the vaccine.

Moreover, the pills work only when administered within a short time of the onset of symptoms. The exponentially smaller public health systems in distant parts of the world rarely reaches significant portions of populations that begin to display symptoms.

I believe the vaccine will still be Africa’s ticket to health.

So how does it make travel to Africa any easier?

The main problem for travelers remains the strict regulations imposed by the western world and the knee-jerk reactions of countries like Britain and Morocco that slammed shut their borders to prevent a rapid spread of Omicron.

I think it’s likely by late spring that with the increased vaccinations and increased availability of the anti-virals, that “normalcy” of a sort will begin to return to western countries.

Vaccinated travelers will still have to decide if the slight risk of becoming infected – and how severe that risk is – is worth the trip. (Who knows? The day might come when travelers will carry Paxlovid the way they now carry cipro.)

Perhaps very premature: this morning MSNBC aired an interview with a South African epidemiologist who said that Omicron cannot be transmitted asymptomatically. In other words you won’t carry it, and others can’t transmit it to you, unless you feel sick.

Vaccinated travelers will still have to test to come home. Masking is likely to continue for some time on international flights and in airports.

But unexpected closures of the sort we experienced last month from Britain and Morocco will be finished. There’s going to be a much more relaxed security put in place. This will result in much less turbulence in the airline industry. Confirmed flights might stay confirmed right until they take-off!

Africa will not stop vaccinated travelers from coming, anymore. Just like keeping schools open, Africa can’t afford further closures and besides, the travelers and business exchanges with the western world should be remarkably virus limited once vaccine percentages increase and the pills become widely available.

So this isn’t exactly a bunch of presents for Africa. But it sure seems like Santa left his whole bundle beside my fireplace!