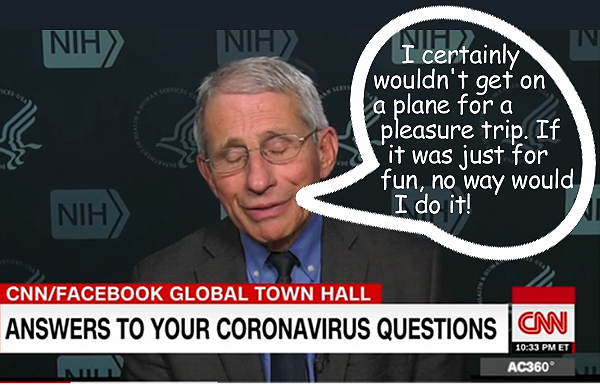 Might this have had something to do with the rush by all the world airlines this morning to waive all fees for changes over very generous time frames?

“I certainly wouldn’t get on a plane for a pleasure trip. If it was just for fun, no way would I do it,” says Dr. Anthony Fauci to CNN.

While there are nuances from airline to airline which may be very critical to your travel, virtually all the airlines today have embraced an extremely generous policy regarding changing your flights.

Tickets purchased before early dates in March for travel in March (and for about half the airlines, April as well) can be changed for no fee.

The airlines are so swamped that they’re requesting passengers not traveling in the next few days to not contact them. View their instructions carefully but basically you can cancel now and rebook after the time you were scheduled to depart for no additional costs.

What will this mean?

I think it depends upon how quickly this virus comes and goes. I’ve followed the airlines for years and they have clever ways of filling the troughs in revenue through times of trouble.

After both 9-11 and the financial crisis generous rebooking terms were offered, although not as generous as now.

9-11 came and went relatively fast, historically. By the new year, 2002, travel had picked up. So had the fares – considerably higher than they would have been if extrapolated normally from years past.

The financial crisis lingered for a longer time. So the fares crept up slowly but they crept up far and a year afterwards, in the late summer, 2009, fares had reached levels never anticipated before.

So the while everyone gets a credit for what they paid for the canceled ticket, it’s not likely to cover your repurchase. And contrary to what lots of people think, there is never a refund. It’s simply a credit for repurchase.

So it would be clear what to do, normally: rebook as soon as possible. Problem this time ‘round is that these “generous” airlines restrict you to a single rebooking. So if you choose, for example, to rebook now for July when fares will probably be pretty low, but then the virus continues unexpectedly through the summer, you’re screwed.

If you wait until July, instead, and the virus is gone and the flowers are blooming in the fresh, clean breezes expect to pay steep fares.