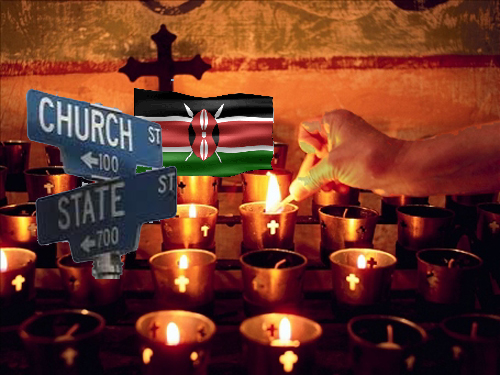 A colonial benchmark is struck in Kenya as Parliament considers banning religious organizations in publically funded schools. The Catholic Church has initiated a massive campaign to counter Parliament’s likely move which I doubt will be successful.

The Education Bill is one of the most striking features of Kenya’s rapid move to implement its new and modern constitution. If successful the bill will effectively wrest the last bit of control religious institutions have on Kenya’s public primary and secondary schools.

Currently up to a quarter of Kenya’s rural primary and secondary schools maintain a religious character as a legacy from colonial times. The state normally places and pays for the teachers and in most cases (but not all) the administration, and the church maintains the infrastructure and controls much of the school day including extra-curricular activities. It is specifically these religious activities that clash with Kenya’s new constitution that Parliament is directed to implement.

Most of these schools are on property owned by the church, and one of the more contentious debates expected is whether the new Kenya will use its modern power of eminent domain to effect ultimate jurisdiction over the existing land and school structures.

Education has been the top priority of every African government since modern governments existed, and regardless of their political and social persuasions, virtually every African country’s education was built on religious foundations.

The British explorer David Livingstone created the sound bite for colonial development in the 1830s: Civilization, Commerce & Christianity. The Three C’s were implemented by a mixture of privately funded missionary work and rapid education funded by the colonial powers.

The two were inseparably intertwined in the 19th Century, whether that was German Lutheranism, British anti-Catholicism or French, Belgium and Portugese Catholicism. Education is expensive, and the colonies had neither a legacy of any type of education or the wherewithal to fund secular educational services.

Besides in the colonial days it was only America that had struck a secular course for its society and America had no African colonies.

When my wife and I first went to Kenya it was to teach. We were hired and paid by the Kenyan government, but assigned to a large 800-student boys boarding school in a remote location in western Kenya that the then Kenyatta government had little interest in supporting. The Catholic Church stepped in, providing almost all of the funds for St. Paul’s Amukura Secondary School and a Headmaster and Assistant Headmaster that were both priests.

The priests essentially ran every component of the school, from sports to curriculum, although a national examination that determined matriculation often governed what the curriculum should be.

The Church, not the government, solicited aid from abroad to fund the schools science laboratories, build and maintain the infrastructure that allowed hundreds of rural boys to board at the school, provide a small dispensary and in many cases scholarships for the most needy.

That has changed significantly over the years, with the government now mandating virtually everything but after-school hours’ programs. Kenya’s rapid development has meant that many boarding schools and the high costs associated with them changed into day schools, but where boarding is still necessary the Church remains the paymaster.

Extracurricular activities, boarding where it continues, and the land on which the schools still sit are the contentious issues before Parliament.

It is the Catholic Church that has the most to lose, and it is pulling no punches in its drive to dissuade Kenyan legislators from further diluting its influence.

If Parliament continues on the track predicted, “…our schools will start producing Godless creatures and the society will be ruined,” Kisii Catholic Bishop Joseph Mairura told reporters this weekend.

The issue is especially sensitive right now as Kenyan Christian churches suffer violent terrorist attacks presumed to be in retaliation for the government’s invasion of parts of Somalia controlled by Islamists.

Public sentiment is charged. The comments left after Sunday’s weekend stories that the leadership of the church is going to fight Parliament’s moves were divisive and angry.

Is a certain Church/State separation the right move for Kenya now at a time of stressed government resources?

It depends on how much faith you have.