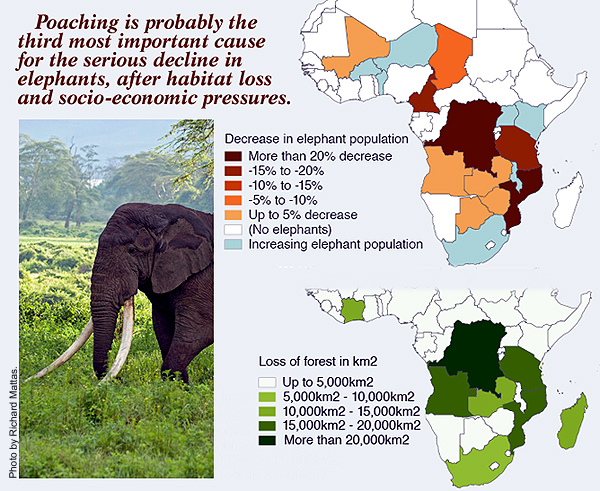 More than two thousand ardent scientists and advocates are in Johannesburg today preparing for next year’s CITES. Historical treaties like the Geneva Convention may actually effect our daily lives more noticeably but only CITES has attracted such global consensus that enforcement is aggressive and routine.

Today horse trading like you’ve never seen is going on, but in the end unlike so much else in today’s troubled world, everybody really will come together.

Sound nice? Yes, it is, but there’s still this one thing….

CITESis the Convention on the International Trade of Endangered Species. It’s why you can’t give your grandmother’s ivory necklace to a cousin in Edinburgh, or Toronto for that matter. It’s why world famous pianists and classic guitarists can’t bring their prized instruments on international tour.

It’s the reason elephants were saved from extinction.

Now, however, the treaty is becoming as politically manipulated as societies all over the world. The issue at hand is the Great Elephant Census (GEC) and the documented serious decline in elephant populations in certain parts of Africa.

There’s really no more that CITES can to than it already has and is doing: banning the international commerce of ivory. The CITES mechanisms for helping elephant are at their maximum.

Several southern African countries are arguing that the tight control on selling ivory needs to be lifted, and that that will help elephants. Southern Africa, northern Tanzania, Kenya and Uganda all have increasing elephant populations, so in those particular areas there appears less a need for any kind of ivory selling prohibitions. Here’s their argument:

South Africa and Zimbabwe in particular have unbelievably large stockpiles of elephant tusks and they point to the GEC as a signal their populations may be getting too large. In South Africa’s case it is almost exclusively from elephants that have died since the prohibition on ivory trading took hold in 1988.

So what are they supposed to do with it? they ask. A regulated sale of the ivory to some Asian entrepreneur, the argument goes, will bring in enormous revenue to help protect elephants.

Elephant populations have been healthy in southern Africa virtually since the 1990s, so this is not a new argument. The counter argument is that any available sale of ivory stimulates the black market. A handful of regulated sales of stockpiled ivory that CITES oversaw about a decade ago seem to support this view.

What I’m worried about is that this argument, central to the CITES debate about one of its most critically endangered species, deflects attention from the real problem.

The GEC was recently augmented by a prominent scientific organization, the International Union for the Conservation of Nature, which claims elephant numbers are now around a half million, which could represent a decline of a third over the last two decades.

That’s fine if the report didn’t imply that poaching is the main reason, and that poaching has little more explanation to it than that it is a criminal act.

As I’ve often stated, the decline in elephants today is not like it was when CITES came to be. Then, except in South Africa, poaching was corporate. The decline in numbers was phenomenal and pretty widespread. It was well organized and massively funded.

Today’s poaching which accounts for maybe half of the current decline is not the international criminal syndicate of the 1980s and 1990s. Rather, it’s usually one-off gangs of a handful of young men trying to survive who are unable to get any gainful employment.

Because the black market has reached such astounding levels (a tusk goes for more than $2000/kilo) it’s a no-brainer for a fairly educated guy who can’t find any other work.

The other major problem is habitat loss. In the last ten years the development in Africa has been unexpectedly strong. There’s much less wilderness than there used to be. Elephants in particular were not particularly fond of living within the great private sanctuaries and national parks which are, fortunately, holding their own and doing well.

Elephant roamed all across the continent and probably lived mostly in non protected and undeveloped lands. Those lands are now rapidly becoming developed.

CITES is and has been doing a marvelous job saving earth for nearly 40 years. We should all support it. But until scientists, animal advocates and conservationists concede that the main problem with elephants is that humans aren’t being guaranteed a simple survival, we’re going to get nowhere.