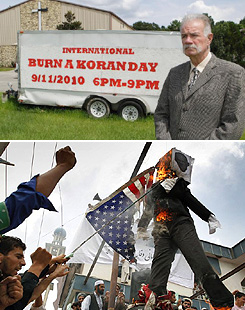 This time Fox News and MSNBC all agree on the facts: Muslims from around the world have joined forces with Sarah Palin et al, or for that matter all right-minded religious persons, to condemn the planned burning of the Muslim holy book by a little church in hicksville Florida later this week.

My first impression is, ‘Jesus Christ! What the hell is going on, here?!”

Jesus would answer: ‘Books are made of paper. Paper comes from trees. We are losing forests in Africa at the rate of an entire country of Jamaica every year. Don’t waste paper.’

Or he might answer: ‘There’s a bigger fire in Afghanistan.’

Or: ‘One out of eight people in America, one out of three people in the world, is hungry right now.’

We are all of us roped into hyperbole and symbol kicking and screaming. There are no tangible issues, here: it’s not a matter of raising enough money for food or finding enough water to put out the fire of war; it’s an …idea.

And then, we grudgingly concede that the reason we want food or water, is to allow us to produce beautiful ideas. And since those of us without food or water can’t think, it’s left to us comfortable ones to think for them. So back to our ideas to govern a fair distribution of man’s food and water.

So my second, forcibly contained impression is: ‘Grow Up!’

Part of America, today, is like an aberrant teenager. Comfortable to the point of decadent, fearful that his/her relationships have the tensile strength of butter, this side of America is thrashing back against itself, against its own ignorance and frustration with not having allocated enough free time for homework.

Yet this part of America claims the moral high ground. In fact, America’s highest point is not Mt. McKinley, it’s the Christian Church. It reaches way up there. It says it touches God.

“Such a despicable act of destroying something so holy to another’s faith can never and should never be construed as an act on behalf of Christ himself. In fact, I would attribute such an act as guided by none other than the Devil himself.”

This blog by an average Joe in the world’s largest Muslim country speaks the language of the American Right. And it throws that language right back into their pitiful little faces.

I am angry that once again we are distracted by nebulous ideas that have literally captured the world, even those that desperately need food and water. Some argue that these distractions are just entertainment, a necessary psychological relief from death and destruction.

No. They are the harbingers of death and destruction. Get a grip, America. Go back to your cookbooks and fix-it sheds. Make something. Stop destroying.